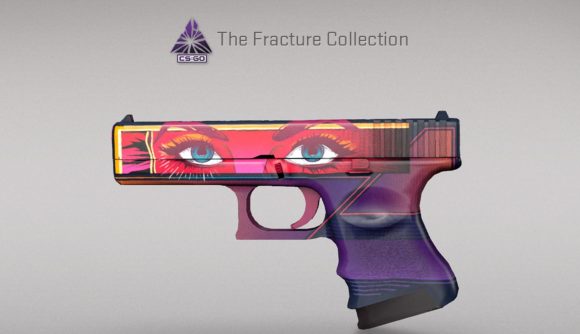 Counter-Strike: Global Offensive’s new update released earlier today, bringing with it some gameplay tweaks, updates to several maps, and a boatload of new weapon skins. There are 17 new skins in total, and perhaps the most interesting thing about these weapons is the fact they were all designed by community artists.

There’s a whole range of weapons and designs available, with MAC-10s, Glocks, Desert Eagles, and the classic AK-47 all getting a makeover. Some of these designs are classic two tone affairs, others have a graffiti overlay, while there’s a few with designs inspired by various cultures too.

Elsewhere, three maps (Mutiny, Swamp, and Anubis) have also been updated. However, these updates only deal with stability updates, fixing clipping, and tweaks to elements like fade distancing. That means you probably won’t immediately notice the map updates, although they’ll certainly improve your overall experience.

The weapon skins are some of the most inventive and varied around, which is likely a result of CS:GO getting community artists involved to blood the game with fresh ideas. The skins cannot be mixed and matched (meaning each one is locked to a specific gun), but the Fracture Crate certainly doesn’t want for choice.

One particularly interesting skin is the Glock-18 design, named Vogue and designed by K A S I, which features a pop art style woman with bold, blue eyes staring out. Another, the Allure skin for the MAC-10 by WhoisVac9, features another woman, this time against the famous Japanese The Great Wave Off Kanagawa painting.

If you’re after something a little more deadly, why not try the Tooth Fairy by 2minds, a skin for the M4A4, which depicts a skeleton. Or if you’re feeling retro, the Cassette skin by Mishovy for the P250 is modeled after an old ’90s era videotape.

The Fracture Case also includes the Shattered Web Knives pack as this box’s rare special item. Whatever you pick, the Fracture Crate allows you to eviscerate your enemies in style.