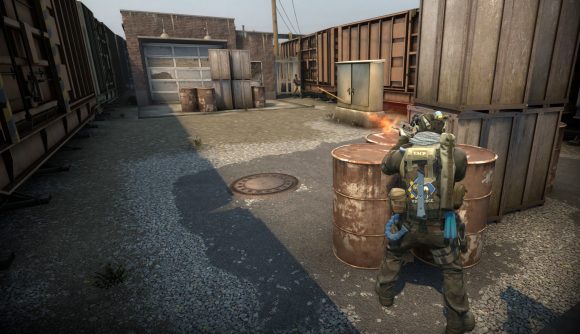 Less than one week after the Krieg was nerfed and the Deagle buffed, Valve has shipped another update to Counter-Strike: Global Offensive designed to make all our lives easier. Now, thanks to the help of dedicated 1vs1 warm up arenas, we’ll be able to get in the zone before we head into a ranked Wingman match.

The arenas are only available on Vertigo and Train at the moment, although Valve says this might be extended to other maps and modes soon. Players will also be able to see the crosshairs of their teammates in the latest patch and have the option to download it via the scoreboard.

A number of maps have also received changes as part of the latest patch. The bomb explosion radius on Anubis has been increased, readability between A main and middle has been improved, and several bugs have been fixed. Chlorine’s base textures have been improved for visibility purposes, and the pigeons on Train have been moved so they’re no longer visible from CT. Vertigo’s layout has once again been changed quite dramatically.

More loot boxes have also been added to Jungle, one of CS:GO’s Danger Zone maps, and an extra house has been added to the Radio Tower region.

If that’s not enough, Valve has also nerfed the Deagle’s jumping accuracy. RIP the new meta.

You can check out the full list of changes below: