As gaming continues to rise in popularity, so does the number of cheaters that infest the games and matches we play. Last year, to tackle the ongoing problem of cheating, Valve set up a deep learning tool comprising of 1,700 CPUs that works alongside Overwatch, Counter-Strike: Global Offensive’s evaluation replay tool, and its details have finally been released.

The patent, which was spotted by Nors3 on Twitter, was filed by Valve in 2018, but the documents have only been released now. The system, which is referred to as Game Cheat Software Detection (GCSD) in the patent, has been dubbed VACNet by the community, and it uses deep learning to see if and when cheats are being used.

As per the  claims made in the patent, the system makes judgement calls based on the player’s behaviour, actions, environment, and patterns of decisions to work out if the player is cheating or not. Based on those learnings, the system teaches itself to question other cases, and push particular cheats from existence. VACNet will also monitor the performance of a player’s hardware to work out if certain programs are executing unauthorised directives.

Valve decided to test out this new technology because other systems were flawed, noting in the patent documents, that other methods “all suffer from problems.”

Based on flowcharts in the patent documents, VACNet examines the small details from a players game, such as the time of movement, interaction with virtual items, other players, and accessibility to certain types of information, taking action if cheats are detected. 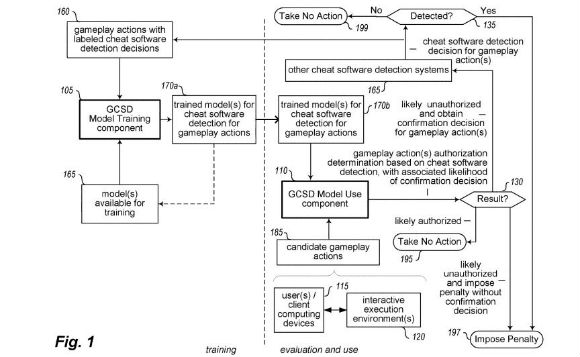 The patent states: “If a particular user is likely to have participated (or attempted to participate) in one or more unauthorized gameplay actions involving cheat software use, the techniques may further include automatically imposing one or more penalties on the user in some embodiments as a result of that determination, while in other embodiments the techniques may instead initiate the potential imposition of such penalties as a result of that determination by referring the gameplay action(s) for further assessment and/or confirmation by one or more other cheat software detection decision systems that decide whether the gameplay action(s) warrant a penalty or not.”

The penalties vary depending on what action was completed, what effect it had on the game, the likelihood of it being unauthorised, and the history of unauthorised actions by the player. Depending on the severity of the above results, players could be banned permanently from the game, temporarily suspended from the game or from certain aspects of the game, or have their trust factor diminished.

We don’t have any specific data on how many cheaters have been caught out via Valve’s current VACNet system, but based on large ban waves that seem to hit the CS:GO every month or so, it’s fair to say that more cheaters are being caught out than ever before.

But, it’s also worth mentioning that VACNet isn’t exclusive to the timeless FPS classic. The patent documents note that this technology could be used in other games with adjusted search parameters, so cheaters beware.