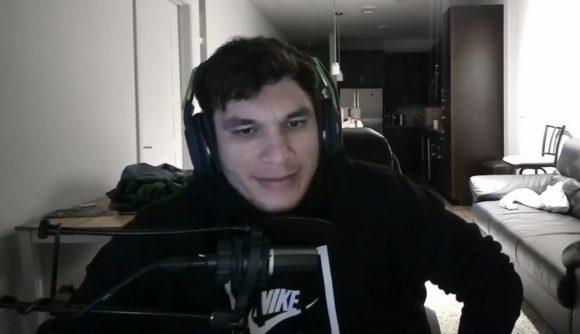 Opening weapon crates or sticker capsules in Counter-Strike: Global Offensive is a popular past time for many streamers and content creators online, but for Tyler ‘Trainwrecks’ Niknam, it has paid dividends over the years. The Twitch streamer couldn’t believe his luck last night when he unboxed one of the rarest stickers in the game on his first try.

The streamer, who’s known for his super-human luck when it comes to opening up lootboxes, managed to pick up an EMS Katowice 2014 Challengers sticker capsule and an EMS Katowice 2014 Legends sticker capsule, which are both rare items themselves. Stickers inside the capsules can range from a couple of hundred dollars to thousands of dollars depending on the team and the finish you unbox.

Trainwrecks chose to open the Legends capsule first, which is worth about $1,800. After saying a quick CS:GO-themed prayer, the streamer rolls past two purple stickers in the early stages of the unboxing in the clip before landing bang in the middle of the Team.LDLC.com holo sticker, which trades for about $6,000.

A little while later the streamer unboxes Vox Eminor Katowice 2014 sticker a from the Challenger Capsule, which is worth $400. By the time you factor in the amount he spent on the capsules, Trainwrecks made $3,000 in one sitting.