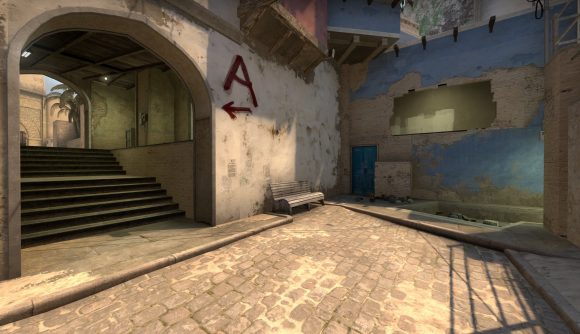 A number of changes have been made to Counter-Strike: Global Offensive maps in the Active Duty pool in the game’s latest update. Train, Mirage, and Dust 2 have all received significant game-changing tweaks, while Studio, a scrimmage map, and Cache, have had minor bug fixes.

The skybox over A site has been removed on Train, allowing the T-side to throw tactical smokes and molotovs over Ivy to help them plant and defend the bomb. It can also be used by the CT-side to stop potential advances from the other side. Similarly, on Dust 2 the skybox above B site from tunnels has been opened. Now advancing terrorists can use the gap in the roof of tunnels to smoke and molotov both doors and window, while flashing site.

It is Mirage, however, that has had biggest changes. Players who sit on the scaffolding outside Palace can now be wall banged from inside the building, the trim around B site balcony has been lowered to give T-side a better view of any jump peeks, and the T-side entrance of mid has been widened to allow better view of connector.

It’s also a subtle change, but Valve has added a bench at the bottom of mid, so that players can now peek short and jump into window without needing the assistance of another player.

This bench is a game changer pic.twitter.com/U0M4n2rEE5

On Cache, more visibility bugs have been patched, and some of the visuals and bugs on Studio have been fixed.