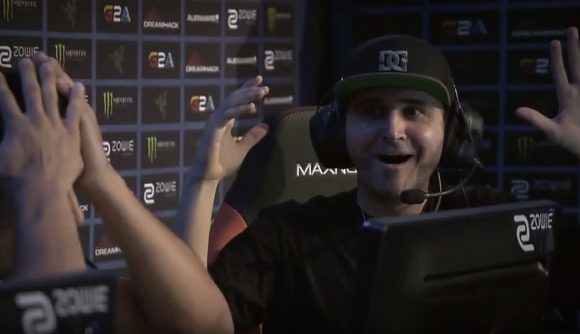 While Jaryd ‘Summit1g’ Lazar is known these days for being one of the biggest streamers on Twitch, his time as a competitive Counter Strike player is often defined by one crazy, embarrassing, and unbelievable moment.

And now, that moment has been recognised by CS:GO fans as the worst play of the entire decade. That’s right, it’s that infamous molotov fail. With 35.1% of nearly 18,000 fan votes, Summit1g’s moment of molly madness beat three other massive faux pas to be crowned the worst play of the last ten years.

The incident happened when he was representing Splyce at DreamHack Austin way back in 2016 and saw Summit1g clutch up what would have been the final round of the map. All he had to do was defuse the bomb, but en route to the bombsite he walked through his own molotov and killed himself in the process. His expression in the clip below speaks a thousand words. Splyce also went on to lose that map.

The poll was created by Don Constatin in response to the official CS:GO poll for the best play of the decade, which was won by Vincent ‘Happy’ Schopenhauer for his famous deagle ace back in 2015.

SUmmit1g’s molotov fail was closely followed in second place by another extraordinary moment in CS:GO esports history: G2 forgetting to defuse the bomb against Astralis during last year’s StarLadder Berlin Major. With 33.3% of the votes, it was a tightly run contest.

Vote for the WORST @CSGO Play of The Decade 🏆

In third was Oleksandr ‘S1mple’ Kostyliev’s failed knife against Team Liquid at ESL One Cologne and in fourth was Finn “Karrigan” Andersen’s USP horror show from back in 2015.

While Summit1g appears to have earned a lot of respect from the streaming community for his massive success on Twitch, it seems the CS:GO community won;t be letting him forget this standout moment in a hurry.