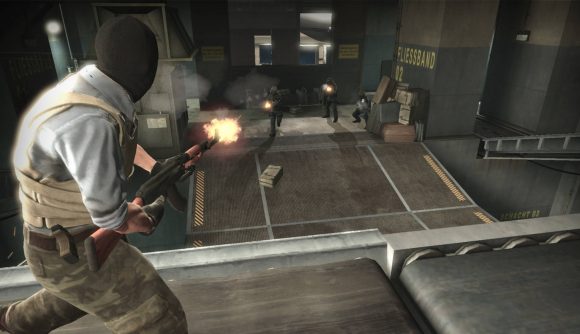 An IRL streamer who was streaming himself at DreamHack Winter in Jonkoping, Sweden, discovered a CS:GO player running cheats while playing at the event.

‘Benczek’ was walking around the venue when he noticed a young CS:GO player using what appears to be both third-person camera and bunny-hop scripts to give himself an advantage over other players. The cheater was in full view of anyone walking by, as well as the players sat next to him, but was still nonchalantly using the cheats. When Benczek originally confronts the player (in what appears to initially be Polish), he turns around skittishly knowing he’d been spotted and gives Benczek a nervous smile.

He then presses the player again, this time in Swedish, asking: “Are you cheating?” The player continues to smirk before simply replying: “Yes,” making no effort to even try and deny it. Benczek then laughs to himself and leaves the cheater to it.

This cheater clearly didn’t seem to mind that people could easily see he was using CS:GO cheats, but using scripts and hacks to gain an advantage can land you a hefty ban if detected.

The player’s actions could also see bans given to anyone else who used their own accounts on that PC if the cheats were left on it, as VAC bans often hand out blanket punishments. However, this does appear to be his personal PC that he has brought to the event, so hopefully it shouldn’t affect any other players.

Cheating has become such an epidemic in CS:GO that players are even building their own tools to catch perpetrators, such as this chap whose AI tool has so far busted over 14,000 cheaters.