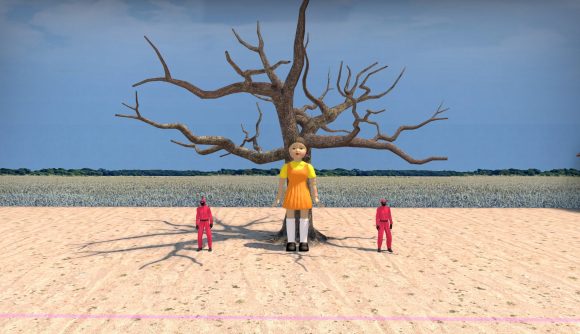 Since the release of Netflix phenomenon Squid Game, creative gamers the world over have tried to crowbar elements, or even whole recreations of the hit South Korean survival drama into their own favourite games. One of the best Battlefield Portal modes, for example, is an abridged version of Red Light, Green Light.

Battlefield 2042 isn’t the only competitive FPS game to feature the hit show, as now a trio of Counter-Strike: Global Offensive players have banded together to recreate all of its featured death games. Thanks to the handiwork of ‘Ansimist’, ‘concole_’, and ‘DepoSit’, each portion of this custom map has been kitted out with a respective game.

Anywhere from two to 64 players can take part in the following games: Red Light, Green Light, Cookie, Tug of War, Marbles, and the Glass Tile Game. Of course, like any good survival game there can only be one winner. Players who make it through the final challenge are given knives for one final brawl to decide who takes it all.

You can check out footage of the map below. As you can see, it’s pretty darn impressive.

If you want to get involved in the grizzly fun, then check out the Squid Game map on Steam Workshop here. We think you’ll agree that it’s three months-worth of effort well spent by its creators. If you’re looking for news on the Squid Game Season 2 release date, our pals over at The Digital Fix have you covered.