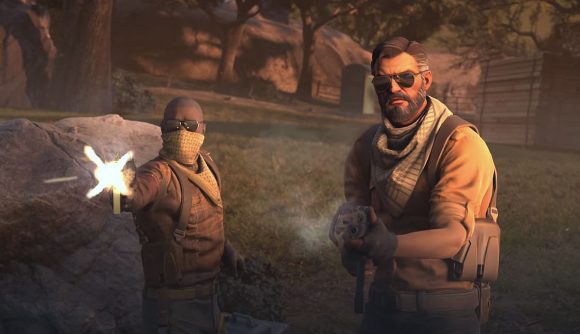 Valve has just revealed the eleventh operation for Counter-Strike: Global Offensive, Operation Riptide. As is to be expected, there is a mountain of new stickers, skins, agents, and more for players to work towards earning over the next few months, but there are a few big gameplay and playlist changes dropping as well.

For starters, there have been some updates to playlists. Players can now finally host private Premier matches on Valve’s own servers, and can invite friends to compete in these matches with queue codes. Seemingly as a result of recent debates around the length of matches in CS:GO, Valve has also added the option to play in shorter competitive matches. As well as the usual 30-round matches you can now also play 16-round, first-to-nine matches that Valves estimates will take around 25 minutes to complete.

In the gameplay department, there are a number of small but controversial changes on the way. Grenades can now be dropped for teammates like you can with weapons, which could see the development of a specific grenade-focused player role. There’s always that one person in your team that knows all the good smokes, right?

There’s also been an update to classic CS:GO map Dust 2, which includes one significant tweak for all you AWPers out there. The visibility through mid from the T-side spawn has been reduced, with the previously open archway now blocked off.

While many are happy with this change, which will allow CTs to cross far more easily, legendary AWPer Oleksandr ‘s1mple’ Kostyliev is already mourning the loss of one of his favourite wallbang spots.

We’re adding new maps during the Operation and updating Ancient and Dust2. Here’s a sneak peek at Dust2 changes: pic.twitter.com/2nCfoFktYi

There’s plenty more to dive into, and you can find all the gameplay changes in our CS:GO patch notes guide. For all the info on the tasty new cosmetics coming to Operation Riptide, which ends on February 20, 2022, check out Valve’s full event page.