Pretty much every Counter-Strike: Global Offensive key that’s sold on the Steam marketplace has links to fraud, according to Valve, who as of this morning have stopped users from reselling newly purchased keys.

The publisher has put a trade ban on all newly purchased keys to target the fraud networks operating on the platform, and although pre-existing keys are unaffected, the decision has hit the trading community hard.

“In the past, most key trades we observed were between legitimate customers,” the blog reads. “However, worldwide fraud networks have recently shifted to using CS:GO keys to liquidate their gains. At this point, nearly all key purchases that end up being traded or sold on the marketplace are believed to be fraud-sourced. Unfortunately this change will impact some legitimate users, but combating fraud is something we continue to prioritise across Steam and our products.”

Of course, this won’t affect the majority of users who buy keys from the in-game menu to open crates, but for those who use keys to barter deals with skin traders, times are changing. And there’s already talk of which skins or stickers could be used as the new currency by the trading community.

“It’s time for redlines and asiimovs to shine again,” Reddit user a9jack999 wrote on a post in GlobalOffensiveTrade discussing the blog. And although traders are already making contingency plans, those with hundreds of keys might still make a profit. 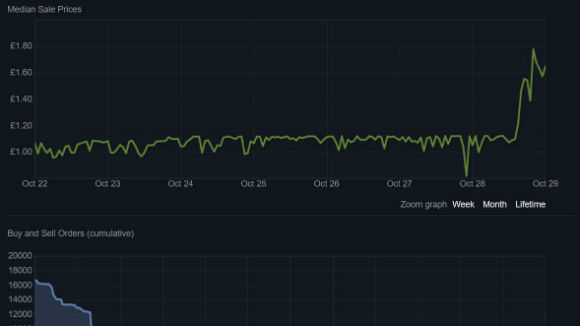 Regardless of where you stand on the skin trading debate in CS:GO, Valve’s commitment to tackling fraud on its platform has to be applauded. But next time you want to make an investment, it’s probably wise to sit on it for a while, instead of jumping in head first.