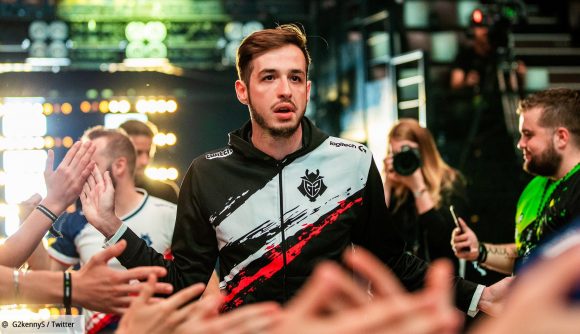 G2 Esports’s Counter-Strike: Global Offensive team has made the decision to allow Kenny ‘kennyS’ Schrub to “explore new opportunities.” The news follows a slew underwhelming results for the team over the last several months, with the player himself struggling to find form. The announcement came via the team’s official Twitter account.

The team’s coach, Damien ‘maLeK’ Marcel refers to kennyS as “a pillar within G2 and a legend in the scene,” and notes the “incredible moments and memories” they have shared together. However, maLeK feels that a new team is necessary for kennyS to remain at the top of the game, as the team looks to shift its approach to it going forward.

This sentiment is shared by head of esports Danny Engels, who says that, if the player finds “a team that can cater to him in full, he will undoubtedly carry that team to the top of CS:GO, as he has done time and time again at G2.”

During his time with G2, kennyS achieved a great deal, including victories in Season 5 of the ESL Pro League, the 2017 DreamHack Open Tours, and 2017’s DreamHack Masters event. More recently, the team achieved a runner-up spot at 2020’s IEM Katowice event.

With kennyS’ removal, Audric ‘JACKZ’ Jug will be returning to the roster, while Nikola ‘NiKo’ Kovač will transition to “a hybrid Rifler/AWP role,” according to the announcement. “We are excited to have JACKZ return to the team, bringing his flair, creativity, and a new balance to the team,” maLeK says.

Meanwhile, the coach states that “NiKo repositioning as a hybrid AWPer gives us a more open-minded approach, while also providing more flexibility within our game and the current meta.” The changes have been made “with immediate effect,” with the new-look roster debuting in Season 13 of the ESL Pro League on March 13.