One of the most iconic gunfights in the history of Counter-Strike: Global Offensive has been immortalised thanks to a new Glock skin that’s part of the game’s CS20 update. The Sacrifice skin, which was created by S1lent, honours the moment Olof ‘Olofmeister’ Kajbjer pulled off a burning defuse in the dying stages of the semi-finals against Dignitas at ESL Cologne 2014.

The clutch, which won Fnatic the round and subsequently earned the team a spot in the final against Ninjas in Pyjamas, has been immortalised as a graffiti on Overpass, and now, as a weapon skin. The Glock’s blue elements represents the CT side and Olofmeister’s sacrifice, and the orange parts represent the T-side and the gunfight. On the back of the pistol, the words ‘tick-tock, tick-tock’ represent the limited time the Fnatic rifler had to clutch the round.

The Glock skin is one of 17 that can be found in the CS20 case, created to celebrate 20 years of Counter-Strike, and YouTuber 3kliksphilip explores each of them in his latest video, which you can watch below.

“This skin started life as a metal texture with white graffiti on it,” the YouTuber says after speaking to the skin creator. “After a few days, more colours were chosen to better represent the scene. A lot of early text was later removed to make it more neutral. Normal maps were used to make it more rough and used, although S1lent believes Valve may have toned down the effect slightly.”

The new Commemoration Famas, created by Ezikyl, has also turned some heads. The shiny new skin celebrates the history of Counter-Strike by depicting a world map, various character models, and map names. The top of the gun also has the words Teamwork and Community engraved.

“Before starting on it, he spent a good few weeks thinking about it,” 3kliksphilip says. “He wanted to make it a skin that represented Counter-Strike as a whole. Rather than to make it about visual or famous callbacks to the series, he wanted to explore the themes of teamwork and community, which he likes to think that Counter-Strike is built on.” 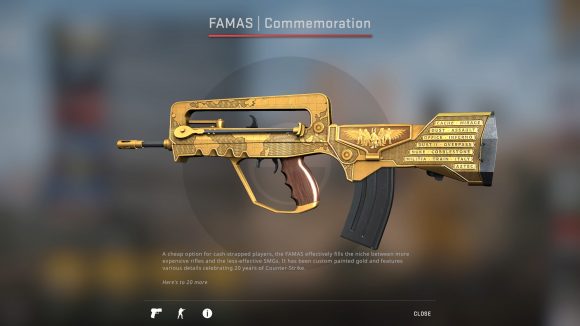 And while this beautiful looking skin is one of the nicer ones in the case, there is a glaring error on the butt of the gun. Every map from the history of CS:GO has been listed, except Vertigo, and by the time the creator noticed, it was too late to change it.

But hey, that’s fine. We all know it’s going to be removed from the competitive match pool soon. Right, Valve?