University CS:GO teams in Catalonia have been told they can’t compete in a Spanish university esports competition because their regional sports body deems the game too violent.

In a Reddit post, one of the players on a Catalan university team showed how teams from the region had been excluded from the University Esports CS:GO league by the ECU, the collective body that represents university sports in Catalonia. The competition invites university teams from all across Spain to compete in a number of titles, such as League of Legends and Hearthstone. For this years competition, CS:GO was introduced, however the ECU have stopped teams in their region from competing because they believe the game is too violent.

The player who posted the news to Reddit, ‘Reivb’, labelled the decision “scandalous and outrageous”, especially as those competing at a university event will all be adults. After probing for a reason as to why they had been banned from competing, Reivb received a response from the esports branch of the ECU, which he translated from Catalan in the Reddit post.

They said that they didn’t want to be associated with CS:GO as it is a “realistic video game in terms of its representation and recreation of violence.”

The full translation of the email that Reivb included in his Reddit post can be found below. 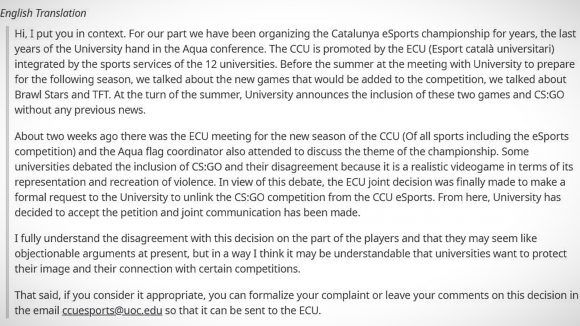 Catalonia is an autonomous region of Spain – which includes cities such as Barcelona and Girona – and therefore has its own governing body for university esports. While teams from Catalonia won’t be allowed to compete in the CS:GO event, universities from the rest of Spain still will be.

This isn’t the first time that CS:GO has come under the spotlight for violence and it’s portrayal of terrorism. In early October, a prominent CS:GO caster claimed that the use of the words ‘terrorist’ and ‘counter-terrorist’ in the game had been putting off potential sponsors and investors for esports teams and tournaments.

This sparked a debate over whether CS:GO should become more sanitised to make it appealing to investors and the general esports audience.