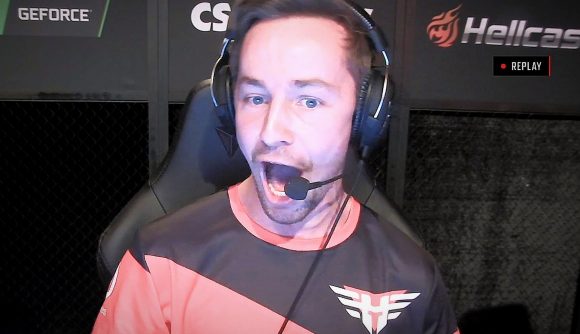 The StarSeries i-League group game between Heroic and Evil Geniuses descended into a hilarious bout of trash talking and mind games between two players.

Heroic’s newest signing Casper ‘CadiaN’ Møller decided to try and gain the psychological advantage in game one of the matchup in Turkey, frequently celebrating round wins and clutches in a, let’s say, enthusiastic manner. He also begins to try and bait out Evil Geniuses captain Peter ‘Stanislaw’ Jarguz by yelling “why are you hiding, Stan?” across the stage. CadiaN continues his antics throughout the first game by also shouting: “I don’t hear you? Come on Stan, where you at? I’m in your head, boy!”

As the game goes into an all important game three, Stanislaw begins to return fire on CadiaN. After his team clutch up a round, the Canadian celebrates in excessive fashion and shouts across some trash to the Heroic team. It’s slightly hard to work out, but we think it’s something along the lines of: “Let’s go! That’s what you call? Helloooo, what the f***!” In a later round, Stanislaw also repeats one of CadiaN’s jibes back to him, asking the Dane: “Why are you hiding?”

Enjoy this series of clips from the match showing the highlights of CadiaN and Stanislaw’s trash talk, but note that there is some strong language peppered amongst them.

It appears as if CadiaN’s mind games didn’t affect the opposition too badly, as EG were eventual 2-1 winners after closing out the final map 16-10. After the match, the Heroic player took to Twitter to say that there was no hard feelings about the trash talking, thanking EG for the “friendly banter.”

We are out of starseries after a 1-2 loss to @EvilGeniuses. Still proud of our victory against NaVi, and the amount of games we have won in our first 3 weeks.

Time to practice after 3 tournaments in a row 👏👏

Also thanks for the friendly banter EG 😎

The hilarious back and forth of trash talk was reminiscent of the old days of competitive CS:GO and that level of interaction between teams during play is something we don’t see all too often any more.