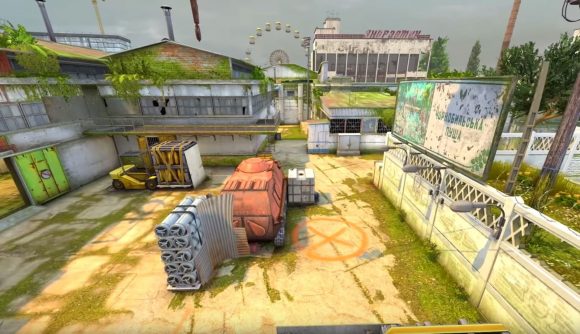 October 1, 2019 FMPONE has revealed a number of changes will be made to Cache following feedback from a number of pro players.

The much anticipated remake of classic Chernobyl-based CS:GO map Cache has been fully revealed at ESL One New York and fans will be able to play it from October 10.

The official map trailer was shown to the New York crowd, with an exhibition match involving a number of CS:GO pros being hosted to show off Cache’s new look. Sal ‘Volcano’ Garozzo and Shawn ‘FMPONE’ Snelling, who rebuilt the map from the ground up, gave fans an in-depth look at the new Cache and talked through some of the changes that have been made.

The most obvious difference is the environment, with the map getting a new vibrant, grassy aesthetic. In the reveal video, FMPONE explains the decision to do this, saying “Chernobyl has a reputation as a gloomy, dark place and we wanted to evoke more of the natural, overgrown beauty.” He also commented on a few new physical modifications that have been made to the map in order to shift the meta, most notably a new window that looks out over mid.

“I think the mid window will shake things up a bit,” FMPONE says. “It’s going to address one of the biggest critiques [of the old map] where it was so difficult for CTs to get mid control.”

Despite this, Volcano believes the new Cache will favour the Ts.

“On the whole, it is a bit T-sided,” he explains in the video. “I don’t think rotation times are that long but I do think retakes can be difficult, especially if the Ts have a lot of utility from the take. I think the changes [in the new Cache] will help address that.”

FMPONE has also revealed that a number of changes will be made to the map, following the show match at ESL One New York. The changes include adding graffiti back, reducing colour saturation, and fixing a number of bugs.

We got a LOT of feedback, thankfully the pro feedback seemed positive! But here’s what we’re going to fix before 10.10.2019 pic.twitter.com/WtfW0RMTOf

Although the designer’s list looks quite big, the big reveal in New York went pretty smoothly, with pros and fans alike sharing their thoughts on the iconic map. And with the map making it’s long-awaited return to the game on October 10, nostalgic CS:GO fans haven’t got long before they can hop back into Chernobyl.