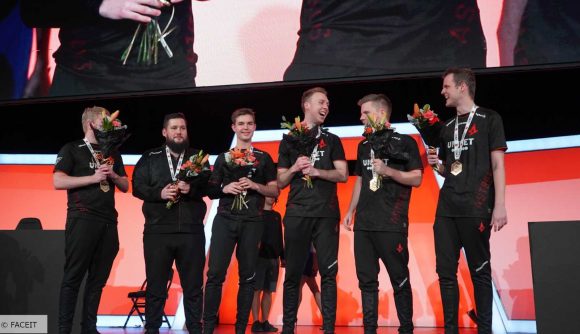 The Kings of Counter-Strike took down Team Liquid in the ECS Season 8 finals yesterday, but when they went out on stage to celebrate, Astralis had nothing to lift because their trophy is stuck in customs.

The Danish team, who now have four ECS titles to their name, defeated Team Liquid 2-1 in an exciting final, which saw Team Liquid take Vertigo in a thrilling overtime match. However, with captain Lukas ‘gla1ve’ Rossander leading by example, Nicolai ‘device’ Reedtz on form, and Astralis’ incredibly deep map pool, Liquid didn’t stand a chance on Nuke and Dust2.

“I think they [Team Liquid] did pretty good but we just want to show 2019 or 2018 are just numbers – Astralis will always be the best,” gla1ve says in a post-match interview when asked about Team Liquid’s recent confidence and form.

And although they walked away with a cool $225,000 from the tournament, Astralis didn’t have a trophy to lift – or break.

According to Andreas ‘Xyp9x’ Højsleth the iconic ECS trophy is still in customs, and the team had to leave the US without it. The Danes seemed to take the news well though, with gla1ve pretending to lift an invisible trophy on stage and the others joking afterwards that their Instagram feeds were getting too full of trophy shots anyway.

Elise Huang, the head of Player Management at ECS, has since tweeted saying the trophy will be with the winners soon.

However, with the ESL Pro League Season 10 finals in Odense, Denmark, kicking off tomorrow, Astralis will have to wait a little bit before they can add the trophy to their cabinet in Copenhagen.