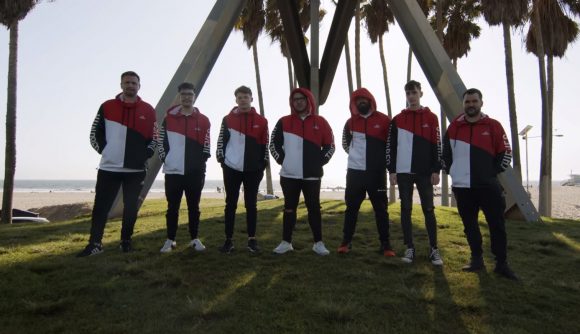 Four months after announcing 100 Thieves was looking to get back into Counter-Strike: Global Offensive, the organisation’s founder Matthew ‘Nadeshot’ Haag finally has his team in the form of ex-Renegages.

The transfer was preemptively announced by Renegades, who jumped the gun to bid its team farewell, in a now deleted tweet, which was then followed up by 100 Thieves’ official announcement on Twitter and YouTube.

Nadeshot revealed in July that he and his team’s plans were in “full force” to build a CS:GO winning team and that he was going to fly out to the Berlin Major, where Renegades reached the semi-finals, to begin negotiations with players and organisations. And despite rumours that 100 Thieves had missed out on signing the ex-NRG roster to Evil Geniuses, Nadeshot and Jacob ‘Maelk’ Toft-Anderson, the organisation’s vice president of esports, say Renegades was in their sights all along.

“We are entering Counter-Strike and we’re doing it in style with the team that we wanted,” Maelk says in the video, which you can watch below. “Very early on in the process, we wanted to get this particular group of guys. I’m super excited to finally say we’ve got this squad. They blew me away with how passionate and motivated they were about 100T.”

And although Nadeshot reveals that the team had run through a number of different options – from building a super team from free agents to buying out star players from other organisations, he can’t be happier with the outcome and his return to the scene he fell in love with three years ago.

“I have been so genuinely excited to be a part of this community once again,” he says. “I think Counter-Strike is one of the most passionate esports fan base that I’ve ever been around. There’s so much history, so many storylines, so many players and organisations that have been here before us that have laid out the groundwork for an incredible esports game, and I’m so damn excited to participate again.

“I cannot wait for the legacy that we create.”

The Australian team have been steadily improving over the last year, creeping into HLTV‘s top ten teams in the world earlier this year, and with a guaranteed spot at the next Valve Major, there’s a real chance 100 Thieves could build on this success.

The 100 Thieves CS:GO roster is as follows: