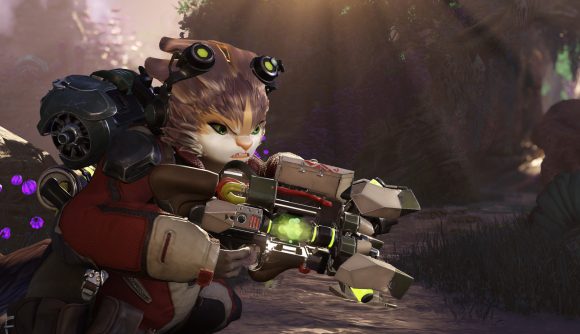 Amazon is muscling in on the competitive team-based shooter scene with a new free-to-play title. Announced today, Crucible will pit a variety of aliens, robots, and humans against one another, as well as hostile creatures, over a variety of objectives on a rogue planet in space.

The game, which is essentially a first person hero shooter crossed with a MOBA, will launch on May 20 with three modes: Heart of the Hives, Harvester Command, and Alpha Hunters. In Heart of the Hives, two four-player teams battle giant boss Hives for their hearts, in Harvester Command, two teams of eight players have to captures and hold Harvesters spread across the map, and in Alpha Hunters, eight teams of two fight to be the last team standing.

Regardless of the mode chosen, players will start each match by selecting one of ten hunters, who all have their own distinct weapons and abilities. To level these characters up, players will need to find Essence, a sort of currency, which will increase their power and enhance their abilities over time.

“In Crucible, every match is different, and players’ choices really matter,” Christoph Hartmann, vice president at Amazon Games, says in the press release. “Every opponent, team, and mode poses unique dangers, and no two matches are the same, so players must constantly adapt to everything the world and the other teams throw at them.

“We’re excited for players to join the hunt in just a couple of weeks, and we can’t wait to  hear what they think of it.”