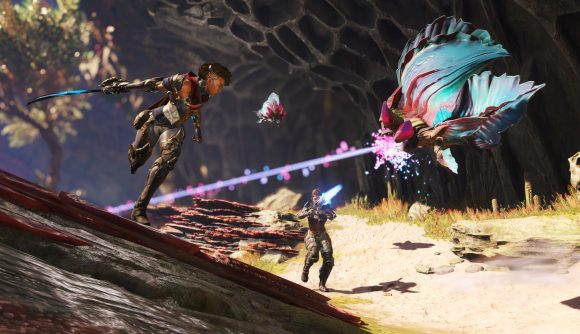 Imagine creating a new free-to-play competitive hero shooter and thinking you’re on to something special, only to see Respawn and EA unveil Apex Legends a few months later. Well, that’s what the team working on Crucible had to endure in the early days of game’s development apparently.

According to our sister site PCGamesN, who’s already given Amazon’s new free-to-play game a whirl, Crucible, which has three modes, including a battle royale-type one, was already in development way before EA dropped Apex Legends without warning in February 2019.

The game, which is slated for release on May 20, takes the best features from other popular online games like League of Legends and Dota 2 and puts its own spin on it. While some might claim Crucible is a copycat as a result, the game plays out very differently to all the other team-based shooters out there.

In Alpha Hunters, which is the name for the battle royale mode, players are paired up and dropped into the map with seven other teams. If your teammate is eliminated, you have to go it alone, unless you find another lone player, who can opt to join your team until the final phase. This all changes when only three players remain, because teams are disbanded and the lone survivors have to duke it out until only one remains.

It’s a unique twist for a game that Amazon hopes will become the next big hit among competitive players online. Although it has stiff competition, Crucible’s long development means Relentless Studios has had a lot of time to analyse its competitors, and make Crucible stand out in a crowded market.