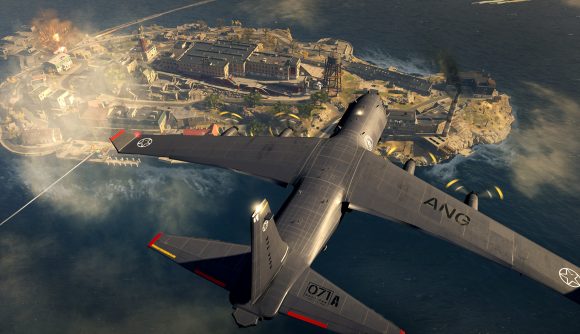 The Call of Duty: Warzone community has once again slammed the game’s lack of an anti-cheat after yesterday’s $250,000 Twitch Rivals tournament was marred by cheating accusations, with one team being booted out of the tournament altogether.

Prior to the winning trio of ‘UnRational’, ‘Nickool’, and ‘Finessen’ walking away with the $45,000 top prize in the final map, allegations of cheating began cutting through the tournament, with the action having to be suspended as players called for a replay and Twitch Rivals investigated. After reviewing gameplay footage, Twitch Rivals announces on the broadcast and on social media that Warzone player ‘METZY’ will be dropped from the competition and would not be eligible for prize money. A Twitch Rivals statement read out on the broadcast says that METZY’s game play appeared “unnatural beyond a reasonable doubt.”

However, since the tournament has wrapped up, one of the main figures accusing METZY of cheating, 100 Thieves’ Thomas ‘Tommey’ Trewren, has now apologised on Twitter saying he should not have given his verdict on METZY’s gameplay as there was “not enough to go on”, despite Twitch Rivals deeming him to have cheated.

The apology also comes after METZY joined Tommey on his stream to look over some of the gameplay and attempt to clear his name of any wrongdoing.

“From the stuff I saw I believed something was off but there just wasn’t enough to [take it] as far as it did and to have everyone saying he cheated,” Tommey says. “I apologise for that, which’ll mean very little to a lot of you and I know that. I didn’t want to take it any further but nobody else seemed to care (bar one or two) and he asked if I’d talk to him so he can prove he was clean, which he did.”

I apologise for that, which’ll mean very little to a lot of you and I know that. I didn’t want to take it any further but nobody else seemed to care (bar one or two) and he asked if I’d talk to him so he can prove he was clean, which he did.

In recent weeks, Tommey has built a reputation for outing people cheating in Warzone, and while Twitch Rivals appears to agree with his initial analysis of the gameplay, he now believes he was in the wrong.

METZY’s recent clips page is now full of gameplay snippets that have been watched by thousands, and almost all have titles suggesting he is cheating. While there’s conflicting views as to whether METZY was cheating, there is certainly a large mob trying to prove that he was.

NRG’s Jordan ‘Huskerrs’ Thomas has described the Twitch Rivals event as “a mess” because of the allegations, and is suspectful that there were multiple players cheating.

Twitch Rivals today was a mess (not because of the admins or how it was ran). One cheater confirmed, another few that I’m very suspicious of, who knows how many more.

You can no longer assume someone is innocent because they’re your “boy” (look at Pacesetter).

Unfortunately without anti-cheat, authentic Warzone tournaments just aren’t possible anymore. We learned a lot from those Gauntlets & I’ve been tellin’ y’all.. There’s too much cheese & way too many rats. Bob & weave baby.

Whether METZY was cheating or not, the insecurity from the community and the recent obsession with outing cheaters stems from the fact that Warzone, in general, is rife with cheating and hacking. The calls for an anti-cheat system across not only Warzone but all recent Call of Duty titles, is now louder than ever.

The Loadout has reached out to Activision for comment on the community’s calls for an anti-cheat system in Call of Duty titles.