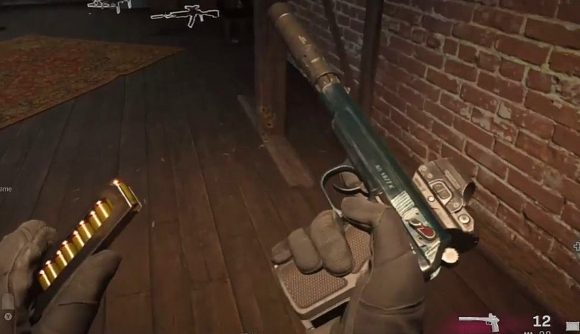 A Call of Duty: Warzone player was in for a surprise when he obtained a yet to be released weapon from a Weapon Drop field upgrade. Reddit user u/RestlessGoats called in their weapon drop to grab a fully-kitted out weapon for his loadout, but they were shocked to find they had pulled a Blueprint of the Sykov pistol, which is yet to officially make its way into Warzone’s weapon pool.

While the Sykov is currently usable in Modern Warfare’s Survival mode, this is the first time the pistol has appeared in Warzone (without the use of datamining). In a short video clip, RestlessGoats shows off the Sykov Blueprint, called Sorokin, which has a barrel attachment making it fully automatic. This looks strong on its own, but players are now feeling extremely concerned that the Sykov could be extremely overpowered when this full-auto attachment is paired with two others that have been previously leaked.

The Sykov is rumoured to have dual wield (please, no more scary dual wields. Please) and an 80-round capacity magazine, which if all used in combination could make this the most overpowered and broken secondary weapon in Warzone.

This isolated incident of the Sykov being randomly pulled in Warzone means that its release in the game shouldn’t be too far away. Warzone has a history with this kind of glitch, and we’ve seen previous features, such as bunker key cards and juggernaut miniguns, accidentally appear from loot crates in certain game modes before they were released.

With Warzone’s meta in arguably the most balanced state it’s been in for a long while, many are hoping that when the Sykov does officially rock up in the battle royale, it doesn’t throw all of that into disarray and become one of the best Warzone guns.