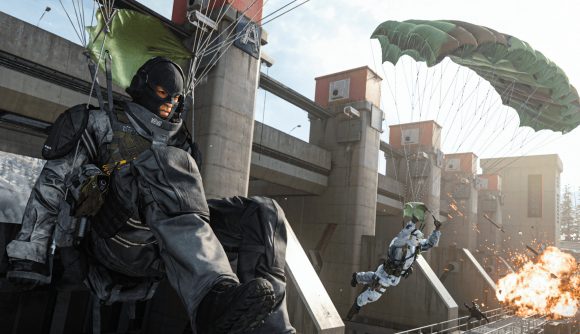 Season 5 of Call of Duty: Modern Warfare Warzone is now live, with new maps, weapons, Operators, and modes coming at you right out of the gate, with a lot more promised for later in the Season too. A mid season event has been billed, but no details have been revealed as of now.

Verdansk International Airport was showcased in great detail during the Season 5 teaser trailer, but that’s just one of four maps joining the game as the Season kicks off. It will feature in the Ground War mode, while Gunfight mode also gets a new map, in the shape of farm based terrain Livestock. Petrov Oil Rig and Suldal Harbour have also been added as multiplayer maps.

There are plenty of updates to Warzone’s map too, with the stadium roof opening up and tweaks to the exterior and interior of the train added for Season 5. Exterior ascenders have also been patched in, allowing you to climb up zipwires to reach the roofs much faster.

Elsewhere, the AN-94 and ISO are added to the weapon pool, the former being an assault rifle and the latter an SMG. These will be joined later in the season by melee weapons the Dual Kodachis, and another classified weapon yet to be revealed. On the Operator front, we’re getting Lerch, a tall, bearded dude with sunglasses right now, with the masked up, night vision goggles wearing Velikan coming later on.

See what #Warzone and #ModernWarfare have in store for you in Season Five.

🏟️ The stadium opens.
🚅 The train arrives.
💪 New operators enter the fray.
🔨 New tools are at your disposal.

On the game mode front, Search & Destroy Double Down joins the game this morning, along with Warzone mode Mini Royale, a faster, sharper version of the Battle Royale mode. Later in the Season, new modes called Ground War Reinforce and Bare Bones will appear, alongside Warzone mode Kingslayer.

On top of the mystery event, Call of Duty also promises more mid season additions yet to be revealed.