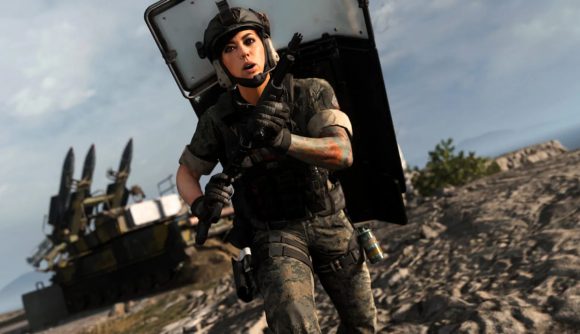 Navigating the final circle of a Call of Duty: Warzone game can be a stressful time for all involved. You’re constantly trying to move with a ring of poisonous gas breathing down your neck, while the remnants of the lobby are doing their best to laser you down. At times like these, you wish you could just sink into the plush interior of an SUV and zoom around and over all of your problems – well, that’s what ‘Zzixah’ did.

The clip posted to Reddit drops us right into the action, with Zzixah hopping up a building to get into the ring. Their momentary reprieve from the gas is rudely interrupted, however, by the two other remaining teams’ attempts to turn them into Swiss cheese. Fortunately, there’s nearby vehicle for the player to hop into, granting them an extra layer of protection.

While circling around the back of the building, Zzixah hits a player-shaped speed bump, bringing it down to themselves and one other duo to fight for the win. However, this is where things take a turn. You see, the opposing duo are running Kali Sticks and Riot Shields, with explosives seemingly absent from their arsenal. This results in the two players acting as matadors for Zzixah’s several ton all-terrain mechanical bull as they skirt around it.

Unfortunately for the duo, it seems the pressure of the rotating circle is too much, as one player finds themselves between a truck and a hard place. Zzixah’s final opponent makes a desperate stand, managing to hop up on top of the player’s truck – a stalemate which would ultimately result in a kali stick clobbering when Zzixah finally got out. That is until Zzixah reveals that they have an IQ of 5,000.

Rapidly reversing towards the gas, it looks like Zzixah is going to put both players out to pasture. However at the last second, the player bails from the SUV, sending their foe into the poison. Before the enemy can react, Zzixah whips out their best MAC-10 Warzone loadout, and sends them off with an L.

This is definitely up there with some of the weirdest endings to a game of Warzone we’ve ever seen – we’re sure you’ll agree.