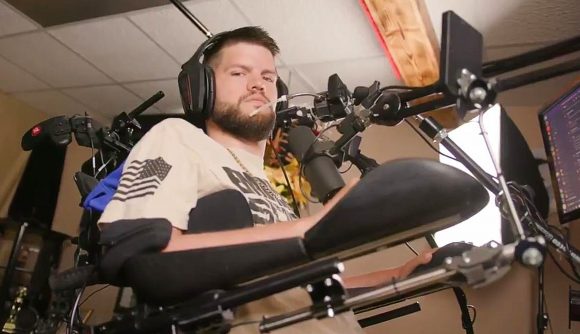 A paralysed, double world record-holding streamer, who plays battle royale games with a mouth-operated controller, has signed for esports organisation Luminosity Gaming as a content creator.

Rocky ‘RockyNoHands’ Stoutenburgh, who was left paralysed from the neck down after an accident in 2006, plays battle royale games like Fortnite and PUBG using a Quadstick controller, which allows quadriplegics to game using their mouth and chin rather than their hands. As seen in Dexerto, his incredible talents have now earned him a place on the content roster of one of esports most recognisable names.

RockyNoHands’ skills on the Quadstick have earned him global recognition as he holds two Guinness world records for playing Fortnite: the most kills in a single game and the most wins for someone playing with their mouth. However, Call of Duty: Warzone has become the battle royale of choice for RockyNoHands these days, and he is eyeing up more world records.

“Right now I’m focusing on Warzone more than any other game,” he says in his announcement video. “It’s the newest one out and I’ve found out that I’m really good at it. I’m probably the best I’ve been at any [battle royale]. I’m trying to get [myself] another world record.”

Please join us in welcoming @rockynohands to Team Luminosity!

💥 Number one quadriplegic gamer in the world
🥇x 2 Guinness Book of World Records Holder in Fortnite
🕹 The coldest ‘Quadstick’ sniper in Call of Duty Warzone#LGLOYAL pic.twitter.com/aMaUEVVsUG

A montage shows off some of RockyNoHands’ incredible plays including gunning down whole teams and some crazy snipes, which make you appreciate the immense skill he has for being able to pull them off using just his mouth.

RockyNoHands currently has a following of over 64,000 on Twitch, but expect that number to rise with the news of his move to Luminosity.