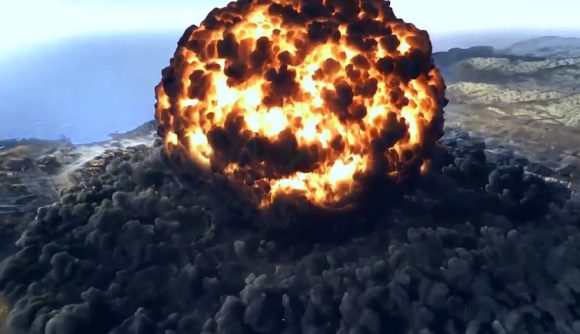 The first part of Call of Duty: Warzone’s The Destruction of Verdansk event has attracted an enormous audience – not just in-game, but on Twitch as well. With lobbies crashing due to the volume of players trying to experience the event in the game, many decided to watch some of the biggest streamers instead.

While they too were experiencing crashes for around the first half an hour of the event, a quick update soon fixed the issue and could show their POV of the moment Verdansk was nuked into oblivion.

Although the conclusion of the event is set to come later today, April 22, part one completely smashed the previous peak viewership record for the Warzone category on Twitch. The previous record, which is just shy of a million viewers, was sent packing as 1.6 million tuned in to see the Warzone nuke event.

The biggest winner of the day in terms of Twitch viewership was Nick ‘NICKMERCS’ Kolcheff, who saw a peak of 371,000 hopping into his stream. While NICKMERCS often boasts one of the biggest sub counts on Twitch, yesterday’s events and hype earned him 12,000 new subs too, according to Twitch Tracker.

Despite yesterday’s huge viewership, there’s a very real chance that it could be beaten again today. The conclusion of The Destruction of Verdansk will likely be an in-game event too, introducing players to a heavily teased Cold War-era version of the map.

All the hype and build up to the event meant there was always going to be massive interest, but the huge numbers seen on Twitch took even the top Warzone streamers by surprise.