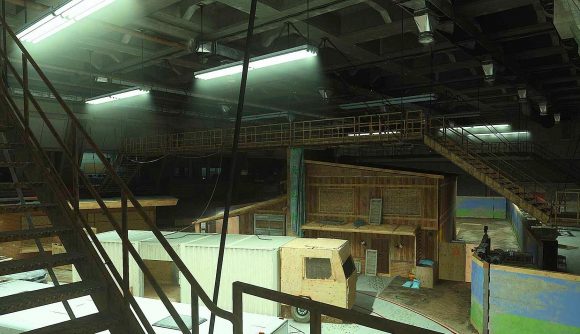 One of the key elements separating Call of Duty: Warzone from its battle royale rivals at launch was its Gulag; a chance to re-enter the fight if you can hold your nerve in a 1v1. While everything else about Warzone has changed at least a little bit throughout the Modern Warfare era, the Gulag has always remained a constant. That will all change, however, when Warzone is finally integrated into Black Ops Cold War next week as part of Season One.

Not only will we be getting a brand new map, which is now confirmed to be iconic Black Ops story location Rebirth Island, but we’ll also get two new Gulag experiences. In a massive blog post laying out everything coming in Season One on December 16, Activision reveals that there will be a new-look Gulag in Verdansk and a separate Gulag for the new Rebirth Island map.

In Verdansk, the now iconic 1v1 arena is replaced by a mini reimagining of Nuketown. While access to the two houses and yards are blocked off, the new Gulag is a near replica of the middle section of the much loved map. Don’t worry though, you can still lob rocks from a viewing gantry.

Over on Rebirth Island, the second Gulag takes on a similar ‘training facility’ aesthetic. However, from the screenshots alone it looks bigger and more complex than the Nuketown-inspired Gulag in Verdansk.

The blog post also reveals that the two parallel corridors, which look great for flanking, are adorned with metal detectors that will go off if you pass through them, revealing your position. Talk about risk versus reward.

Welcome to #BlackOpsColdWar Season One. Available on all platforms December 16. pic.twitter.com/15Qf1pKZMx

As well as new Gulags, a new vehicle is coming to Warzone that will be highly desirable. Helicopters are already the best way to get around the battle royale, either to rotate to the safe zone or escape a bounty-hunting enemy. However, in Season One, there will also be Attack Helicopters introduced, which are the same as regular choppers but with a slight difference: two massive mounted miniguns. These won’t be available on day one, but will be introduced later in the season.

Finally, as we already knew, Black Ops Cold War’s arsenal of weapons will be added to Warzone for Season One. Where these will land in the meta when paired with all of Modern Warfare’s weapons will be interesting to see.