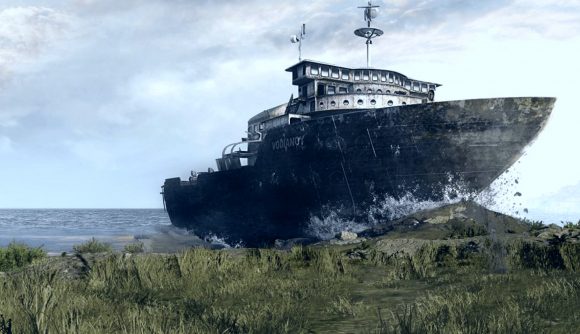 Season Two of Call of Duty: Warzone is upon us, and there’s some serious changes to Verdansk with the ominous entrance of the cargo ship Vodianoy.

The ship, which over the last couple of weeks has been creeping ever closer to Verdansk, has now grounded itself on the coastline near to Prison to create an all-new point of interest called Shipwreck. This is an enormous new destination that spans several levels, and with everyone dropping in to take a look, it’s creating some absolutely chaotic battles already.

As was pretty much confirmed by some newly-added calling cards in Black Ops Cold War yesterday, down in the depths of Shipwreck is a horde of zombies. While the previous zombie cameo in Warzone saw actual players turn into zombies, these are actual AI-controlled undead. When killed, they will drop a new item, a Yellow Keycard, which can open up yellow containers aboard the Vodianoy.

These containers fling out a heap of cash, scorestreaks, and more delicious loot when opened.

Elsewhere in Verdansk, missile silos and new bunkers are beginning to open up underneath the three concrete monuments in the city. These are:

Within each of the new bunkers is a machine displaying a zombies symbol with a percentage reading at the bottom. At the time of writing, it is displaying ‘05%’, and players are speculating this number will rise throughout the season and more zombies will begin to fill up the map. Either that, or it’s part of another intricate easter egg the community is yet to crack.

We think it’s more likely the former, as the Shipwreck POI, which is currently the only area with zombies, has its name crossed out in red when you look at the map in-game. The theory is that as more POIs are overrun by the walking dead, they too will be crossed out.

While not listed officially by developers Raven Software, a new wooden dock has been added to the frozen body of water above Dam.

New dock found at the Dam in #Warzone!!!

Could this mean we will see water up there sometime soon?! pic.twitter.com/u6j4veqTlF

While we have some massive new additions, some aspects of the map are now being shut off. The underused and often buggy Subway system is now closed, as is the Stadium Garage. A number of bunkers – 00, 04, 05, 06, 09, and 11 – are also no longer accessible, so expect some updates to our Warzone bunker codes guide.

As was pointed out by Modern Warzone, this now means that three previous Warzone easter eggs have now been removed, as these areas were the final destinations for each one. This means that the weapon blueprints you got as a reward are also no longer attainable.