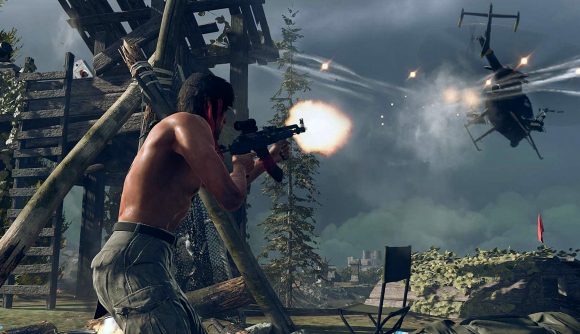 It’s that time of the week again where we bring you a completely busted or slightly leftfield loadout for you to try in Call of Duty: Warzone Season 3. We’ve already had unusual SMG and LMG combos from Nick ‘NICKMERCS’ Kolchef and a tournament terrorising class from Thomas ‘Tommey’ Trewren, but the man of the hour (or rather, week) this time is none other than ‘JGOD’.

Fresh off the back of recently hitting a million subscribers, Warzone YouTuber JGOD gave his thoughts about the state of the meta following yet another nerf to the AMAX. During that video, he suggests two loadouts that really caught our attention. Yep, this week you’re getting double the bang for your buck.

While one is a meta-buster, the other is a bit more “experimental”, in JGOD’s own words, but one thing is the same in both of these loadouts: they are both double AR classes.

Players running two ARs used to be fairly common at the start of Season 3, when you could make your best FFAR Warzone class perform like an SMG. However, after Raven Software recently made ARs less viable at short range, it’s become a rare sight in Verdansk.

However, these two classes from JGOD prove that the double AR strategy is still alive and kicking. Let’s run you through the loadouts, and see what JGOD has to say about both of them.

Here’s the first of this week’s double helping, and it’s a strange combo you won’t see all that often in Warzone: the Kilo and the XM4. While the Kilo build is the bread and butter long-range build (and the same one featured in our best Kilo Warzone loadout guide), the XM4 is kitted out to be a more mobile, close-range option.

Here’s the build for the Kilo:

And here’s the build for the XM4:

Is this XM4 going to rival some of the best SMGs Warzone has to offer? It’ll surely come close. JGOD also tips this as a good option as a sniper support, so dropping that XM4 into our best Kar98k Warzone loadout could make for a great combination.

Remember, this is a bit of an obscure class, and is catered more towards players that are bored of running the same loadouts rather than those looking to break a Warzone kill record. The next loadout, however, is one of JGOD’s top picks for the current meta…

This follows the same principle as the last loadout: An AR for long-range slaying and one moulded to perform like an SMG. But this features two of the best Warzone guns right now.

For long range, you’ve got the definitive AMAX class, which JGOD still believes is “top dog” in Warzone right now. Then, he pairs it with the Black Ops Cold War AK-47, a gun with surprisingly good close-range ability.

Here’s the build for the AMAX:

The AMAX build is the same as the one in our best AMAX Warzone loadout guide, because it is simply the number one gun for beaming at long range.

The AK-47 is fleshed out with similar attachments to the XM4 from earlier, and will behave in a similar way. Try it out, and see if it’s good enough to replace your favourite SMG.

For both classes, there is pretty much the same lineup of perks and equipment. JGOD suggests Double Time or E.O.D. for Perk 1, then Overkill and Amped for Perk 2 and 3. A Heartbeat Sensor is a must for your tactical equipment, but the lethal choice comes down to personal preference. Semtex, Thermite Grenades, C4s – all will work well.

Whether you go for the experimental Kilo and XM4 combo or the devastating AMAX and AK loadout, the double AR class is certainly back on the menu in Warzone.

Come back next week to see the spotlight shone on another overpowered, underused, or unusual Warzone loadout.