How’s it going, Warzone fans? We’re back with another edition of Warzone loadout of the week, the series in which we throw an overpowered, underrated, or unusual loadout into the spotlight for you to try in Verdansk and Rebirth Island.

This week, we are bringing you a loadout which in the hands of New York Subliners’ Warzone streamer Aydan ‘Aydan’ Conrad has recently set a new Warzone kill record. Despite admitting it’s probably not the optimum loadout in the current Warzone meta, Aydan uses a Krig 6 and PP-19 Bizon class to drop 61 kills, a new record for a Solos vs Trios game.

While the Krig has become a staple in players’ loadouts in Warzone Season 4, the Bizon is a slightly more leftfield pick. However, using a magical combination of attachments, Aydan turns it into a hip-fire machine that can tear down teams with no issues at all. Aiming is overrated anyway.

So, want to see the recipe for a record-breaking game of Warzone? Here are all the details.

Aside from the barrel attachment, this is pretty much the same build used in our Krig Warzone loadout guide. The Krig has quickly become the most popular assault rifle in Warzone thanks to its decent damage, big magazine attachments, and low recoil.

Not much more to say about this Krig other than it is super dependable, is easy to use, and is one of the best Warzone guns right now.

The really interesting bit of this class, though, is the SMG Aydan pairs it with. Let’s take a look.

The Bizon did begin to see some more usage in Season 4 after a couple of buffs, but if you’re looking to set a kill record, this isn’t usually your go-to close-range option. So how does Aydan make it so lethal? 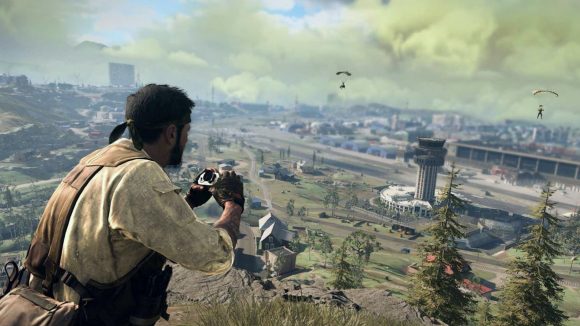 This combination of attachments make it an absolute monster for hip-firing, similar to how a lot of people set up their MP5 Warzone loadouts. The difference here is that the Bizon has a big old 64-round magazine as standard, so you free up an attachment slot by not having to bolt a Drum Mag or something similar on to it.

As you can see from the gameplay, the Krig and Bizon combination makes light work of Aydan’s opponents – even if it is a self-confessed bot lobby.

For this class, Aydan is running E.O.D., Overkill, and Amped – a pretty standard trio of perks.

For tactical equipment, Aydan opts for the Heartbeat Sensor. For his lethal, he’s got Throwing Knives in his back pocket, which can help eliminate downed enemies quickly to secure kills.

So, if you fancy some hip-firing action in Verdansk this week, or want to try and emulate Aydan’s nutty 61-kill massacre, give this loadout a spin.