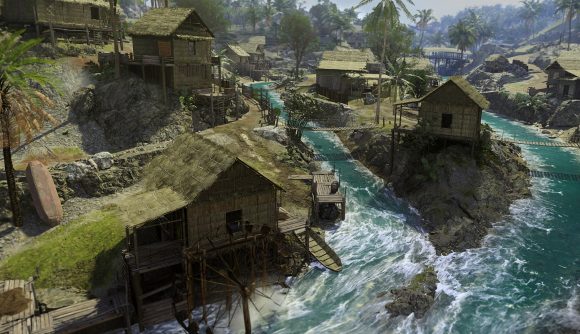 Last night, Activision rolled out the red carpet for Call of Duty: Vanguard in a movie premiere style event. While the main focus was of course on Vanguard – and, inadvertently, the level of intoxication of several notable rap artists – we still managed to wangle some Warzone Pacific news out of the event.

Hosts and casters for the premiere were all kitted out with custom, World War Two-style jackets, which were claimed to have the layout of the new Warzone map, Caldera, sewn into the inner lining. This was confirmed to be true after everyone’s favourite Call of Duty caster Clint ‘Maven’ Evans decided that it was totally fine to show the “top secret” map to the thousands of people watching… Oops.

Following this, images have circulated on social media showing the map in more detail, including Caldera’s named points of interest. In the image, we see the names of 11 locations, while one more appears to be obscured by the collar of the jacket, bringing the total number to 12.

While some of these POIs were predictable based on what we’ve seen of Warzone Pacific’s Caldera so far – such as Volcano and Phosphorous Mines – others were a pleasant surprise. The map will contain a Submarine Base, a Fishing Village, and Ancient Structures.

The main urbanised area of the map, City Capital, is located on the southern tip of the island, while the Volcano takes centre stage, being located pretty close to the middle of the map.

It’s worth noting that Activision is yet to officially confirm that these are all the POIs in Caldera. However, this marks a big reduction in the number of named POIs if this is the final version of the map, with the current iteration of Verdansk boasting 21 named locations.

Don’t worry about Caldera – which is roughly the same size as Verdansk – feeling sparse though, as Activision has already claimed that in total there are over 200 points of interest across the map to explore.

We can expect to learn more about some of these locations as part of the Secrets of the Pacific event that’s coming to Warzone on November 24.