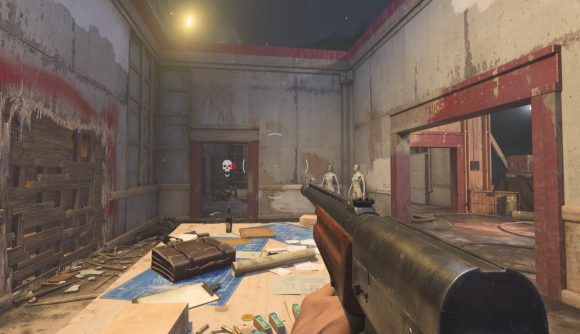 Call of Duty Vanguard has only been out for a week, and already players are finding creative ways to break the game by using its super-sized attachment system to turn the best Vanguard guns into overpowered death machines. One player has showcased this beautifully by securing a V2 Rocket in just over 30 seconds on Das Haus, armed only with a ridiculous shotgun build.

Streamer ‘Zexafy’ uploaded the 40-second clip to Twitter, which features them sprinting from one side of the tiny map to the other, cleaving through all in their way with what looks to be the best Vanguard Gracey Auto shotgun class the game has to offer right now. Triple kill. Fury kill. Brutal. Mega kill. One by one, Zexafy mows down his enemies, leaving nothing but destruction in their wake.

The Gracey Auto is one of four shotguns featured in Call of Duty Vanguard at launch, and by far packs the fastest fire rate of the bunch. Although its innate power isn’t quite on par with the best Vanguard Combat Shotgun class – which has also been terrorising smaller maps like Das Haus with its brute force and incredible range – the Gracey is no slouch.

The class Zexafy has made is so broken, in fact, he has now unironically dubbed himself ‘the guy who ruined Vanguard’ on Twitter. I guess we’ll find out for sure next time we boot up a Das Haus match…

You can check out the clip of Zexafy’s Gracey Auto rampage below.

this has to be the fastest V2 on the game… (33.3 secs) #Vanguard pic.twitter.com/2BaRyhi2MZ

With a slew of Call of Duty Vanguard weapons causing all kinds of balancing problems at the minute, it surely won’t be long until developer Sledgehammer Games takes a literal sledgehammer to their stats in a future Vanguard update.