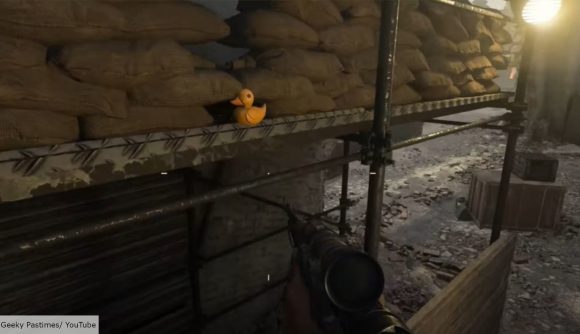 While Call of Duty Vanguard’s Zombies mode launched without any elaborate easter eggs – much to that community’s disappointment – if they really want to scratch the itch and go on the hunt, they may find some solace in multiplayer. That’s because a well-renowned easter egg, planted in games by developers throughout the ages, has appeared in Vanguard. Everyone, we’re going on a rubber duck hunt.

As spotted (and subsequently hunted) by YouTuber ‘Geeky Pastimes’, Vanguard’s multiplayer maps all appear to feature a little yellow secret tucked away in inconspicuous areas. From nesting at the top of a palm tree, to hiding in a hedge, to camping out underneath a tyre stack , Geeky Pastimes has so far found a rubber duck in seven of Vanguard’s 16 multiplayer maps.

But it would be odd for the devs to just have a bit of fun with some devious duck placement on just seven maps, right? Because of this, Geeky Pastimes and plenty of other CoD easter egg fans are now embarking on a quest to find one on all 16 maps.

Now the chances of you seeing one of these rubber ducks in your regular multiplayer matches are slim, as the ducks are susceptible to bullets and explosions which would blast them away from their actual locations – all of which you can find in Geeky Pastimes’ video below.

However, hopping into a custom game will allow you to hunt them down far more easily.

So, Call of Duty Vanguard does have an easter egg after all – just not where you expected it to be. Sure there’s nothing more to it than tracking down some rubber ducks, but with how well-hidden they have been so far, it’s clear the devs want to give easter egg hunters a challenge.