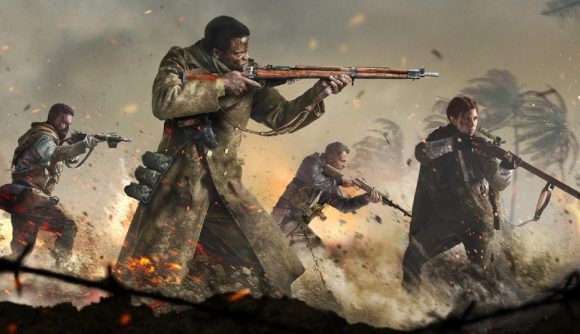 Ahead of its worldwide reveal within Call of Duty: Warzone tonight, Call of Duty: Vanguard has seemingly had its alpha added to the PlayStation database, according to a Twitter account that monitors newly submitted additions.

The PlayStation Size account reports that a 20GB file was added to the PlayStation database titled “Call of Duty: Vanguard Alpha”, with artwork also appearing to reveal that the alpha will be known as Champion Hill. The artwork also shows a structure in the background which could be a new map or area of Vanguard.

The Vanguard Champion Hill Alpha is listed as a PS5 build, but PlayStation Size reports that it will be available for players on PS4. In previous Call of Duty titles, alpha versions were exclusive to PlayStation consoles only as part of Activision’s partnership with Sony, so the Vanguard Alpha will likely not be appearing on PC or Xbox either.

No date is shown, however prominent leaker Tom Henderson appears confident that the Vanguard Alpha will launch on August 27.

Other leakers, Henderson included, are also confident that Champion Hill is a new game mode that incorporates both round-based and battle-royale elements. While traditional multiplayer could be included in the alpha, it appears that Champion Hill will definitely be a part of it, if not the sole focus.

🚨 Answer some of your questions :

🟫 Alpha Available For PS4-PS5 , i don’t know anything for other platforms (you need to find Xbox Game Size Page 😂)

🟥 Alpha Available in All Regions

⬛ Alpha Size is probably different in each region (2-3 GB)

PlayStation Size also reports that the Vanguard Alpha will be available in all regions.