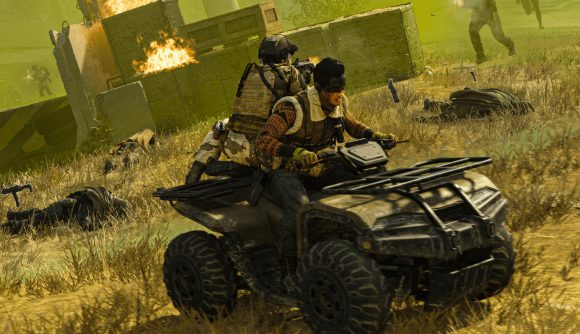 It’s not easy getting vehicle kills in Call of Duty: Warzone but Tim ‘TimTheTatman’ Betar made it look easy during his stream yesterday, racking up kill after kill while defending his down teammate.

In the clip, which you can watch below, Tim hits one player in a car before racing to save his downed teammate BobbyPoffGaming from being thirsted. But in the process, the last remaining player slips past the bonnet and takes cover under some stairs. So instead of going for the gunfight, TimTheTatman drives up the stairs, jumps off the railings and into a nearby truck, killing his clueless enemy and getting a teamwipe in the process.

The whole thing is absolutely hilarious and deserves a watch, especially since he then goes on to kill another player with a quad bike shortly after.

Given how frustrating the handling of many vehicles in Call of Duty is, the streamer’s driving skills are impressive.

These matches must have had an impact on Bobby Poff too, since he and his duo teammate Tommey went on to win Keemstar’s Warzone Wednesday tournament just a few hours later.