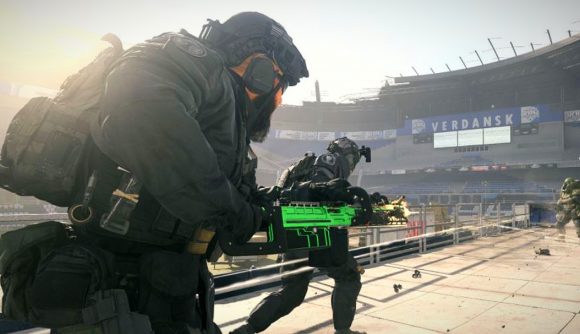 Call of Duty: Modern Warfare got a shed-load of new content with the Season 5: Reloaded update, introducing the Games of Summer event plus a new operator and game modes. However, it’s the latest addition to the game’s arsenal of weapons that has caused the most conversation so far.

The new FiNN LMG is the culprit, and from early footage of the gun in action since the update went live on August 24, it looks insanely powerful. Following weeks of pleading from the community, Infinity Ward finally patched the Bruen LMG that was terrorising players, particularly in Warzone. However, the FiNN already looks capable of sliding right into that space in the meta that the Bruen has left, with clips showing its rapid slay time, high mobility, and seemingly broken XRK ChainSAW stock attachment.

While its accuracy and damage at long rage is a cause for concern for Warzone players, the ChainSAW stock – which prevents ADSing but essentially turns it into a minigun – is making it lethal in multiplayer. Similar to the Operator Mod for the Hades LMG in Black Ops 4, the FiNN ChainSAW is scarily strong.

With Warzone players finally free from the wrath of the Bruen, the FiNN – which only requires seven melee kills in seven games while holding an LMG to unlock – now looks set to be their new nemesis.

And here’s the Finn LMG in #Warzone…

With it being so quick and easy to unlock, expect this gun to flood the meta for the rest of Season 5 – that is unless it gets hits with a nerf.