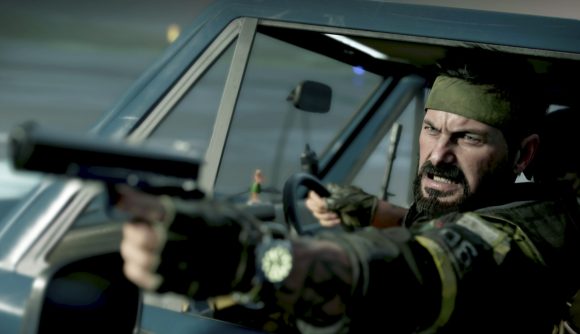 The latest patch for Call of Duty: Black Ops Cold War has arrived, introducing a number of notable changes to both Multiplayer and Zombies. This follows the game’s first post-launch balance update, which saw the infamously powerful MP5 submachine gun being nerfed.

Over in multiplayer, spawn points have been adjusted in the Hardpoint mode to reduce the amount of time spent travelling from your spawn point to any active Hardpoints. Plus, enemy weighting for spawns in both Crossroads Strike and Armada Strike have been tweaked.

Beyond that, a pesky UI error potentially triggered when loading into a match of Fireteam: Dirty Bomb on Ruka has been addressed, as has an issue that would mess with the Flak Jacket’s ability to protect you from explosive damage when playing in Hardcore modes.

In Zombies, you’ll no longer be able to earn a Field Upgrade charge while your Ring of Fire is activated. On the flip side, the undead won’t perform ranged attacks unexpectedly from here on out, and a nasty bug that caused Megaton to become permanently invincible after splitting has been fixed.

Some unspecified stability issues within Zombies mode have also been crushed, though we’re still awaiting a fix for the split-screen bug. In the meantime, here’s how to set up split-screen multiplayer in Multiplayer.

Check in with @Treyarch's Creative Specialist, Miles Leslie, on what's coming in this '80s reimagining of the iconic map. pic.twitter.com/c2fxHzVZs3

The latest patch has arrived just in time for today’s launch of Nuketown ’84, a classic map reenvisioned. You can expect to see it go live from 10am PT.