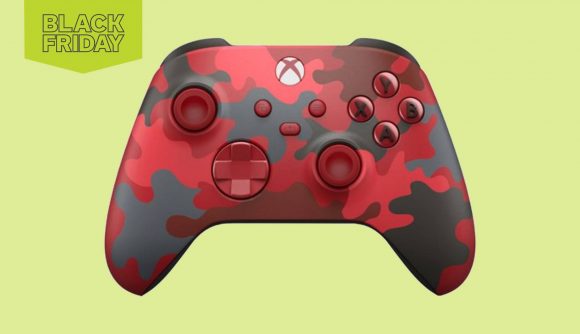 You can never have too many controllers. Whether it be the latest hi-tech advancements in technology or a cheap knock-off for your kid to use as he knocks it about and throws it around. However, the best quality controllers for those that own Xbox consoles are arguably the official ones created by Microsoft.

Well, if you like the colour red and camo prints then the Daystrike Camo Special Edition Xbox Series X|S controller is definitely the best option available for Microsoft’s most powerful consoles to date. And, if you are looking at jumping into Halo Infinite’s newly-released multiplayer or campaign as a part of the Xbox Game Pass December 2021 games line-up then the pattern matches the Banished’s armor, with its black and red focus.

This controller has just got even better thanks to a sweet Black Friday deal. It is currently available at Best Buy in the US, with $15 off from the usual price of $69.99. Unfortunately, if you live outside of North America, you won’t see any saving on this controller. However, those in the UK can buy it from the Microsoft Store for £59.99 here, which is the cheapest price right now.

With all the latest features, including enhanced rumble, improved grips, and the Xbox Series X|S button layout, you will be able to get the most out of both old and new Xbox consoles.

If you are looking for some more games to test the controller out on, why not check out our picks for the best Xbox Series X games.