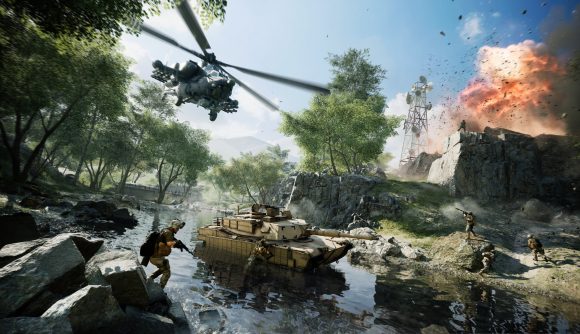 Back in April, EA announced that Battlefield would be venturing out into the mobile world with the introduction of Battlefield Mobile. Now, several months on, a Google Play store listing for the new FPS mobile game has appeared, giving us a first look at what it will entail.

According to the description, there will be a blend of game modes that are both familiar to the series’ existing players, as well as some new ones for Mobile. In each mode, players will be able to build their own loadouts – taking a leaf out of Battlefield 2042’s playbook – rather than relying on presets.

Battlefield Mobile will also be chock-full of “powerful vehicles like tanks and ATVs”, which are perfect for scuffing up Mobile’s destroyable environment. Although this perhaps indicates Mobile will focus primarily on land battles, fans of aerial or naval skirmishes will be pleased to know that those will also feature.

According to a blog post published yesterday by community manager ‘EA_Cade’, Battlefield Mobile will begin playtesting on Android devices in Indonesia and the Philippines during the autumn of this year. The blog also confirms that Battlefield 3’s Grand Bazaar map will feature in the mobile experience, as well as the Conquest game mode.

Full FAQ is available over on the Battlefield Mobile Forums 👇👀https://t.co/LiJ8OTnEnz pic.twitter.com/7vdM4Ely0w

The blog post also hints that there’ll be scope for audiences in other regions to get involved with playtesting in the future, with EA stating that pre-registration will eventually become possible as it expands its radius between now and launch.