The next entry into EA’s Battlefield series has been revealed, and it’s called Battlefield 2042. The reveal trailer, which was packed with everything from gun-toting robot dogs to a massive tornado, showed off some of the incredible looking locations players will be battling in, from mountain tops, to futuristic cities.

We also now know when we’ll be getting a first proper look at gameplay: Sunday, June 13. EA’s director of communications for shooters, Andy McNamara, confirmed that we will get our first glimpse during Microsoft’s E3 Showcase, which starts at 10:00 PDT. However, we already know the Battlefield 2042 release date thanks to the official PlayStation blog: October 22.

While the trailer itself was largely cinematic and was a tad light on real info, we did see some new and interesting things referenced, and a subsequent blog post from Sony has shed more light on the game. That robot dog caught our eye, and could be a gadget that can be used in Battlefield 2042. Alternatively, it could be a perk or individual piece of equipment tied to a specialist.

Battlefield 2042 specialists are different to any class system the game has used before, with each having their own character, back story, and of course their in-game specialities and traits. Think similar to Rainbow Six Siege’s operators.

Specialities can take the form of grappling hooks, recon drones, or Syrette Pistols (which fire health vials rather than bullets), and all of these can be combined with different traits to create your own unique build. And that’s before you get onto their weapon loadouts.

We’ve only seen a handful of specialists so far, but EA says ten will be available when the game launches. 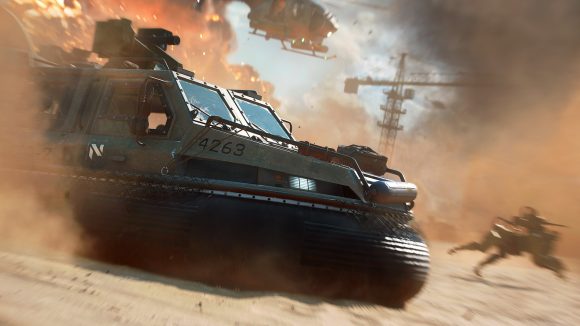 As well as the robot dog, there was the usual plethora of vehicles on show that you would expect form a Battlefield title: helicopters, jets, tanks, quad bikes, a hovercraft (which we believe would be a first for a Battlefield game, correct us if we’re wrong), and even a very inadequate tuk-tuk which was used to escape a giant tornado. Please EA, let us drive the tuk-tuks.

There was also a lot of wingsuit action, which will likely be a movement mechanic in the game. Wingsuits can be used by any specialist who comes equipped with one, but EA has kept shtum on which classes will channel their inner flying squirrels for the time being.

You can watch the full reveal trailer in all its glory right here.

Finally, Battlefield 2042’s All Out Warfare mode introduces seven brand new maps. The maps will host 64 players on PS4, and 128 on PS5. PlayStation says that the last-gen maps have been purpose built with a “more focused layout in mind.”

The Battlefield 2042 maps are Kaleidoscope (a cityscape in South Korea), Manifest (a port in Singapore), Orbital (a rocket launch pad in French Guiana), Discarded (a shipyard in India), Renewal (a technology centre in Egypt), Hourglass (set in sandstorm-ridden Qatar), and Breakaway (an icy mountainscape in Antarctica).

Players who pre-order Battlefield 2042 will get a taste of the game first in an open beta, but if you’re waiting for the full release in October, EA already has four seasons of content planned – which will include new specialists and maps.

Put the date in your diary: October 22 is the day you’ll need to book off work to jump into some futuristic Battlefield action.