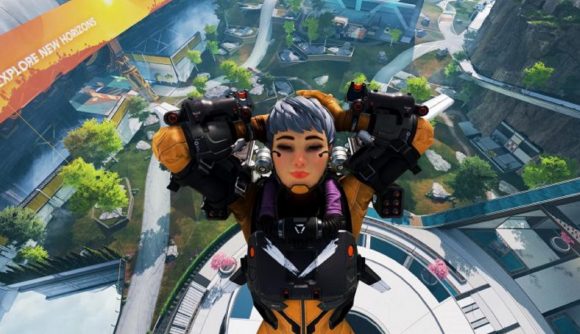 An Apex Legends developer has revealed that Valkyrie’s ‘tactical hover’ ability will be nerfed on Thursday, May 26, as Respawn developers are concerned with how it could be used in the ALGS Championship.

The ability isn’t listed as one of the new character’s official abilities, but it concerns how her passive and tactical interact. When the newest entrant to the Apex Games uses her passive VTOL jets – that’s her jet pack – it consumes fuel at a rapid rate to ensure she can’t stay in the air for too long. However, that changes while Valkyrie is aiming her Missile Swarms.

When aiming her tactical while in the air, Valkyrie consumes 10% of the usual fuel, allowing her to send an accurate cluster of paralysing missiles towards opposing teams. However, players have been abusing this ‘tactical hover’ interaction, especially during the final circles of competitive matches. As a result, Respawn is removing this feature as the developers are worried that it could impact the quality of the ALGS Championship.

We didn’t spot as many Valkyries as we expected in the first weekend of ALGS Championship action, but players abusing this interaction to “take coffee breaks above the final fight,” as Respawn’s associate live balance designer John Larson put it, is clearly on the developer’s mind.

Larson says in a tweet that the design change is being implemented after seeing it abused in scrims, which potentially means there are more Valks on the cards in the NA and EMEA regions than there were in APAC North, APAC South, and SA.

Valk’s "tac hover" was designed to consume fuel at 10% of the normal rate.

With ALGS ramping up, we figured we should remove this exception (we found Valks would often take coffee breaks above the final fight in scrims).

This will go live on Thursday.

The nerf has had a mixed reception from players, with some calling it an “extreme reaction” which impacts casual players, but pros have pointed out the extreme cases in which Valkyrie can be incredibly powerful in the final moments of a match.

Admittedly gold knockdown shields are disabled in competitive matches, but the tactic remains powerful and, ultimately, boring. As Respawn prepares for the biggest event of the Apex Legends esports calendar, it clearly doesn’t want the final moments to come down to one player flying above the opposition and hoping everyone else dies before they hit the ground.