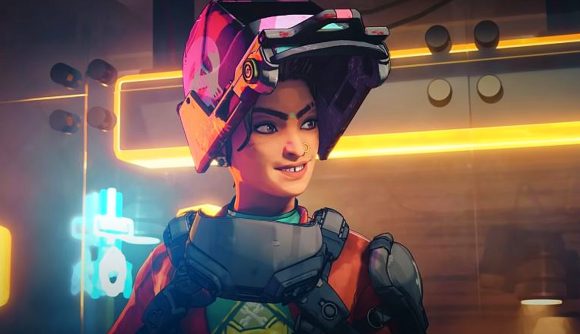 Respawn has dropped the reveal for Apex Legends Season 6, showing off the game’s 14th legend, Rampart, and announcing a new crafting system which ties in to Rampart’s background and aesthetic as an “expert modder.”

Season 6, which will be titled Boosted, will as expected bring with it a new Battle Pass and a new legend. Rampart – who in our opinion is one of the coolest-looking characters in the battle royale to date – is shown off in the trailer as a tinkering modder with a passion for repairing and reworking weapons. She is described on Apex’s Season 6 page as “an expert modder who made her name in underground fight clubs.” She also “talks big and has the ballistics to back it up.”

She also appears toting a massive minigun-style weapon that is also featured in her splash art. In the final scene of the trailer, which sees the weapon lying on a workbench in front of her, Rampart declares: “Sheila and I are ready to dance.”

Shiela the big scary gun, then, looks to be one of two things. The most likely option is that Sheila is part of Rampart’s kit, probably as her ultimate ability.

Or it could be the end product of an existing weapon being extensively modded as part of the newly announced crafting system. This crafting system – which is suspiciously like rival battle royale Hyper Scape‘s where finding the same weapon will make the one you’re holding stronger – will see players improve their gear by finding materials around the map to “build something better.”

It could be that each weapon has a powerful final form – a bit like a Call of Duty: Modern Warfare Blueprint, for example – that have their own names? This is purely speculation though, and Sheila is most likely a Rampart-specific ability.

We don’t know the full details on Rampart or the crafting system just yet.

The Volt SMG will also be added into the weapon pool for Season 6, which is said to “pack a punch.”

As always there will also be a brand new season of ranked Apex Legends, but the previous naming system for ranked seasons has been updated. Previously, the ranked ‘series’ lagged behind the actual content season (e.g. Apex Season 5 contained Ranked Series 4). Respawn has now brought ranked in line with the actual content, with a renaming and renumbering. Now, Season 6 will contain Ranked Season 6. Hallelujah.