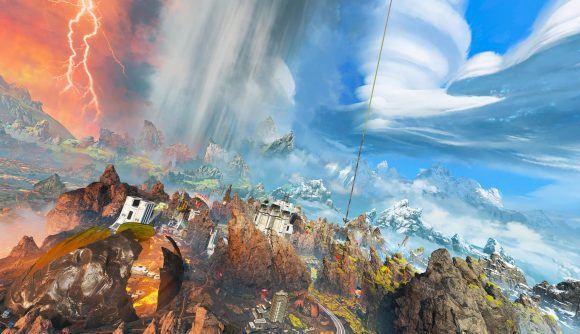 Rejoice, Apex Legends fans, because the World’s Edge map is returning to the battle royale game today, 98 days after it last featured in either the ranked or regular map rotations. The map was completely absent in Season 12, and the first seven days of Season 13 have been played exclusively on Storm Point, but today, it returns.

World’s Edge is generally considered to be many players’ favourite map, but it’s also the top choice for pro and competitive play, too, which is why players will be glad to see it find its way back into Apex Legends’ map rotation for Season 13. Right now, it’s only in regular lobbies, as Apex Legends ranked players will have Storm Point as their Split 1 map this season. The map for Split 2 is currently unknown.

The map is one that provides great diversity in its locations, from the ice cold Epicenter to the fiery flames of the Thermal Station. Almost every area of World’s Edge is ripe for looting and gunfighting, and that’s what makes it such a compelling map for players. The majority of the community are more than happy for it to be back after more than three months on the sidelines.

In Season 13, World’s Edge will rotate with Storm Point and Olympus in the regular map rotation, so there’s plenty of variety.

There have been many Season 13 changes in the latest content update to hit the Respawn’s battle royale, including the introduction of a new legend – Newcastle. The Apex Legends Saviours update also reworks the game’s ranked mode, as well as balancing many weapons and items, something that can be found in the full patch notes if you’re so inclined.