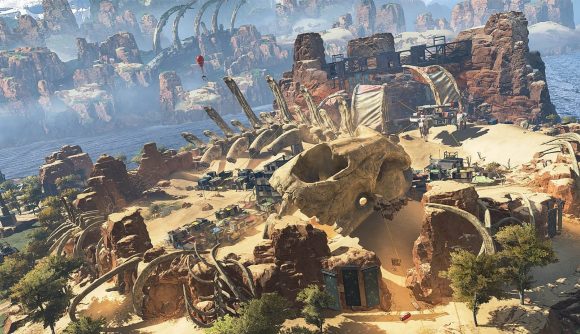 Apex Legends is going back in time next week as its Genesis collection event brings back the original versions of its first two maps and adds a beloved former POI as an Arenas map.

After weeks of teasers on social media, the mad folks at Respawn have decided to offer up the ultimate nostalgia trip for the Genesis event, which kicks off on June 29. For a limited time, the original versions of Kings Canyon and World’s Edge will return, looking as box fresh as the day they were first released. That means no massive Hammond Robotics Harvester in the middle of World’s Edge, and yes – Skull Town is back in Kings Canyon. I’m not crying, you’re crying.

Both of these OG maps are entering the map pool for standard solos and trios, and will rotate every hour. Sadly, you won’t be able to live your old glory days of climbing to the top of the Apex Legends ranks on them though.

Skull Town enjoyers will also be thrilled to know that the POI is also becoming its own map in Arenas. Could this day get any better…

The answer is yes, because of course there is a shedload of new cosmetics coming in this collection event. Legendary skins for the Charge Rifle and EVA-8 will feature, as well as plenty of new skins for your favourite legends. Oh, and Revenant is getting a proper menacing heirloom.

Rewind the Apex Games in the Genesis Collection Event. ⏪

Return to the original Kings Canyon and World’s Edge maps or fight for glory on the Skull Town Arenas map. Return to where it all began starting June 29. pic.twitter.com/uuUFY55jsy

You may also want to head over and check the latest Apex Legends patch notes, because it isn’t just content that the Respawn folks are dropping – we’ve got some balancing changes too.

There are tweaks to Octane, Revenant, Lifeline, Wattson, and Bloodhound to look out for, as well as changes to a handful of weapons and some Arenas balancing too.

So if you’re an OG, day-one Apex player that’s been longing for the moment you can hotdrop Skull Town once again, then this update will certainly make your day.