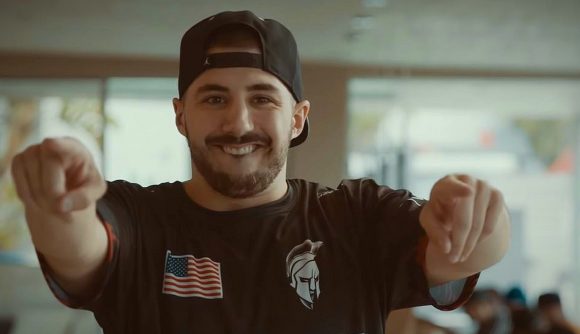 It’s no secret that in recent weeks Call of Duty: Warzone has seen several of its biggest streamers gravitate towards rival battle royales like Apex Legends. While many briefly returned to Warzone yesterday for the in-game reveal of Call of Duty: Vanguard, and celebrated the news that it would finally receive a new anti-cheat and new map later this year, many were quick to return to Apex once the event was over.

Arguably the most high-profile streamer to shift from Warzone to Apex Legends recently is Nick ‘NICKMERCS’ Kolcheff, who has been grinding the game’s ranked mode and has been largely positive about his experience playing Apex.

During his August 19 stream, NICKMERCS swiftly returned to Apex following the Vanguard reveal event and jumped right back into some competitive action, having recently hit Master in the Apex Legends ranks. While he admits to his chat that he has “zero desire” to play Warzone right now, and that he “fucking loves” ranked Apex, he does admit that there is one major issue with the ranked system he would change.

“The issue with this ranked system is that you can’t drop out [of your current rank],” NICKMERCS explains. “That’s a big issue, because a motherfucker like me, or us three [his team], we can get to Master and technically play this shit however we want.”

With exception to new ranked seasons and soft resets at the end of ranked splits, once you reach a certain rank in Apex Legends you can not fall back down the ladder, no matter how many times you lose. While in Master you could still gun for the title of Apex Predator, NICKMERCS believes that the lack of risk to your rank causes players to “play however they want.”

Despite this issue, NICKMERCS says he is really “onboard” with Apex’s current ranked system. While it might not be perfect, it’s clearly got NICKMERCS hooked and is scratching a competitive itch that Warzone often fails to.