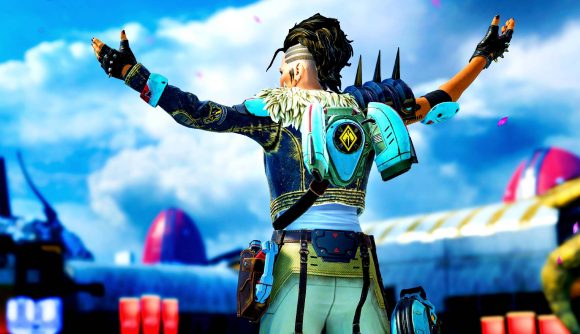 Initially appearing as a foil to Fuse, Maggie has muscled her way into Apex Legends as the 20th legend to appear on the roster. During a media event, game engineer Chris Winder reveals that elements of Maggie’s kit were originally made for a legend that would resemble a “Polish winged hussar” – horse-mounted soldiers defined by large plumages of feathers on their armour – called Husaria.

Describing her as a “one-woman SWAT team”, Husaria was originally designed to be a “breacher” – someone who can take defensive legends to task and push fortified squads. It’s clear that Maggie’s kit is preserving the essence of this character, but Wilder reveals that there were quite a few iterations of this “breacher” before Maggie’s kit was settled on.

Respawn was aware that creating a balanced character was important – Apex Legends has a lot of “open ground” in-between its buildings – and this led to the design team testing a number of abilities. Winder reveals a “riot shield, a flashbang, and even at one point, a shotgun attached to her leg” were considered.

An affinity for shotguns was the main element of Husaria’s kit that made it through early testing, but Maggie’s Riot Drill and Wrecking Ball both fit into the vision that Respawn wanted to create a character built to push enclosed spaces and fortified positions.

“Maggie’s aggressiveness really mapped well onto the breacher gameplay and having this very-clear personality and character background helped answer some of the questions [Respawn] had about this design and the kit”, Winder explained.

As aggressive as Maggie is, she isn’t built as a one-woman killing machine. Maggie’s Riot Drill is going to be a useful tool at disrupting enemies in cover, but it’s not going to deal a lot of damage – Winder has confirmed that “the spray hurts, but it’s not as bad as a Thermite Grenade.”

In addition to this, Maggie’s Wrecking Ball is as useful as a disruptive tool as it is a tool for pushing and positioning. Wrecking Ball’s explosion is going to deal 20 damage and knock opponents back, but the speed-boosting pads it leaves behind are going to be handy in a pinch.

Winder believes that Maggie is going to be useful to any team – “no matter the composition” – but will find herself most effective against legends like Gibraltar and Rampart. However, he has also shared that Wattson’s Pylon is going to be able to intercept both the Riot Drill and the Wrecking Ball – with Apex Legends’ Maggie release date approaching, we won’t have to wait long to see her in action.

As for Husaria, we just don’t know what’s going to happen with her character. Respawn hasn’t said whether we’ll see Husaria in the future, but all eyes are on Maggie at the moment and you get a sense that this could just be another design that’s left on the cutting room floor.