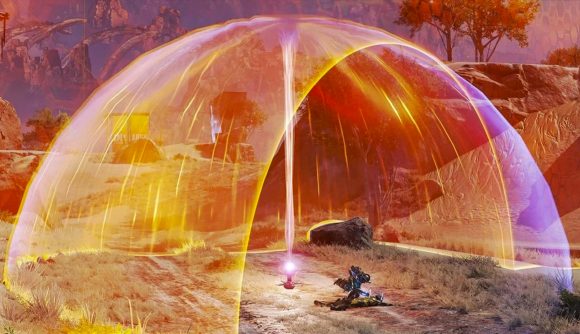 If you’ve played a single match of Apex Legends’ Chaos Theory event, you’ll undoubtedly have experienced the near-deafening sounds that plague Mad Maggie’s Kings Canyon takeover. However, the erroneous effects should be patched out today, according to Respawn’s developers.

The problems surround the new Heat Shield which was one of the many changes added in the Chaos Theory update. The Heat Shield is a variant of Gibraltar’s Dome Shield, except it protects you from taking ring damage instead of from incoming fire. The Heat Shield can be carried by any legend in the new Survival Slot providing they’re not carrying Respawn Beacons.

This has led to some matches being overridden by trolls constantly entering and exiting Heat Shields purely to annoy other players in the lobby. It makes enemy footsteps even more difficult to detect than usual and is a general annoyance as you play through games only to be hit with an earsplitting crash at random intervals.

However, Apex Legends’ game director, Chad Grenier, published a list of hotfixes on Twitter, among which were adding a lot of missing textures to legendary skins, but also “Heat Shield audio plays for all players with no falloff.”

We're working on a hotfix to address several issues that will hopefully go out Monday morning. Here is a list of what's in the patch so far. More fixes coming after this but sharing what's next. Some items redacted because they're for content that has not been turned on yet. pic.twitter.com/LQEAo3jkOS

The update is due to be deployed today, March 15, at 10:00 PDT (13:00 EDT, 17:00 GMT). After players have complained that the noises are making them nauseous and giving them headaches, it seems the patch is coming at just the right time.

Many players have turned to Apex Legends ranked matches in the week since the Chaos Theory update went live in order to escape from Mad Maggie’s slightly grating commentary and the even-more-annoying Heat Shield sound bug. However, the Ring Flares are a fun addition to Kings Canyon, so perhaps players will give it a try after the bug is fixed and as Apex Legends games heat up in the second week of the event.