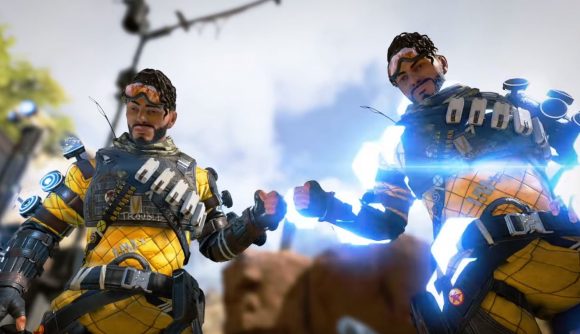 February 11 Respawn has confirmed duos mode is returning for the Valentine’s Day Rendezvous.

Ah, Valentine’s Day. The one day in the calendar year where you’re expected to dress to the nines, cook a lavish meal, and enjoy a cheeky game of Apex Legends with the loved one. That’s right, duos mode is returning to the battle royale, and Respawn wants you to party up with significant other on the most romantic day of the year.

The developer confirmed that the Valentine’s Day Rendezvous is happening after Shrugtal, a respected Apex Legends dataminer, uncovered the code pointing the mode over the weekend.

The event goes live today (February 11) until February 18 and will bring duos mode, a 2x XP boost if you buddy up with a friend, two Valentine’s themed gun charms, a DMR skin, a banner, and a Valentine’s Day badge.

But that’s not all. The leaker also suggests we’ll be seeing King’s Canyon a lot sooner than the second ranked split. In another string of code, a reference to the original map is made in another limited time squads mode scheduled for February 21-24.

Shrugtal believes this is the pre-season King’s Canyon map and will be brought back for players to enjoy as part of the game’s anniversary celebrations, although Respawn hasn’t commented on this yet.

Both modes should be an instant hit with fans. The community have been calling for a return of King’s Canyon since the addition of World’s End last season, and the addition of limited time mode events like solos and duos always prove to be a popular addition. And even if you’re alone this Valentine’s Day, the possible addition of duos shouldn’t get you down. There’s a real chance you could solo queue and meet your total legend online. Cute, right?