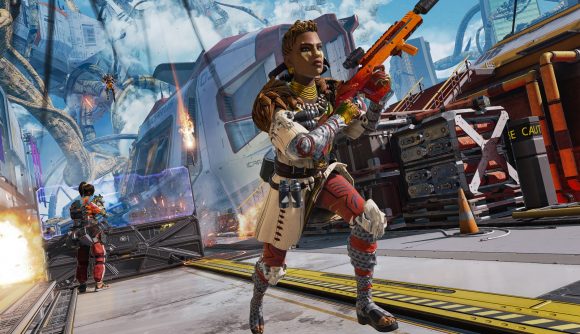 BLAST Titans is just around the corner. The experimental Apex Legends tournament – which is the first to feature the game’s new Arenas mode in a competitive environment – will see 40 of Europe’s top teams compete across two weekends of action.

With the first ever ALGS Championship still fresh in the minds of a lot of the competitors, expect to see a fair few old rivals butt heads, and maybe see some new storylines be written too. After getting their thoughts on Olympus’ inclusion in the BLAST Titans map pool, we also grilled Aqualix’s Oscar ‘Yuki’ Jiang and soloQgoats’ well-known Apex Legends ranked lobby stomper Shivam ‘ShivFPS’ Patel about who their biggest targets were for the tournament.

For ShivFPS, who placed an impressive third with soloQgoats in the European ALGS Championship, it’s a team that he has encountered plenty of times in the early stages of matches which always puts up a strong fight.

“We’ve had a war with K1CK now for ages in competitive Apex,” he explains. “That’s definitely one of the teams that we’ve had a grudge against. We’ve been fighting them off drop for a long time now, [it’s happened in] quite a few tournaments. I think that’s our rival team – the one we fight against the most and have the most issues with… K1CK is our arch nemesis.”

With the potential for K1CK’s Polish roster and soloQgoats to tangle yet again, keep a close eye on where the two teams drop and rotate to in the early game.

Watch the 40 competing teams play when the groups kick off this Friday 23 July on https://t.co/qk0vOdN3sV 👀#BLASTTitans pic.twitter.com/JmJkWrvj1Z

While soloQgoats’ main rivalry stems from territorial disputes and clashes, Aqualix is looking to get one over on two teams at BLAST Titans – both for varying reasons, according to Yuki.

“[Our main rival] would probably be NEW Esports,” he says, “because they play really well and they run a similar comp to us – I think identical, actually. They play like us, they shoot like us, they move like us, so that’s why when we fight it’s like fighting a mirror. So if you see us two fighting each other that’s something to watch because we’ll really be trying to take them out.”

As well as NEW Esports, Yuki says that Aqualix – and the vast majority of the field – will have their eyes set on the top dog from the ALGS Championship: SCARZ.

Whether it’s scrapping with your arch nemesis over drop spots or battling a carbon copy of your own team, these are just two of the many rivalries you’ll see during BLAST Titans over the next two weekends. The tournament gets underway tomorrow, July 23, and you can check out the action on the BLAST Twitch channel.