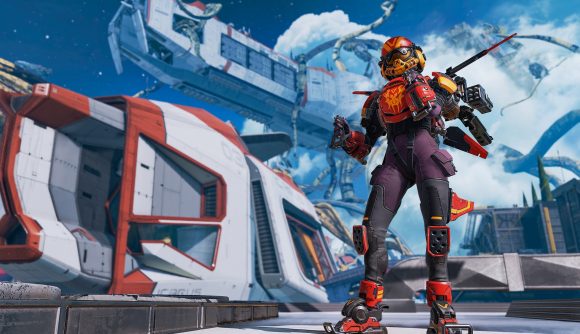 BLAST Titans kicks off this Friday, pitting Europe’s very best Apex Legends players against one another in a format unlike any other. The two-weekend event sees these players not only compete in their favoured battle royale mode, but also in the round-based Arenas game mode too.

However, that’s not to say the battle royale section of BLAST Titans is going to conform to the norm. While the majority of matches will be played on World’s Edge – the most competitively viable map and the only map currently used in the Apex Legends Global Series – some will also take place on the newest map, Olympus.

Olympus’ stock as a competitive map is quite low, and the announcement that it would be part of the map pool raised some eyebrows within the pro Apex community to say the least. While it has featured in a handful of smaller tournaments before, this will be a true test to see if it can facilitate exciting action.

“It’s very experimental, isn’t it?” Aqualix’s Oscar ‘Yuki’ Jiang tells The Loadout ahead of the tournament. While he admits that, given the choice, he probably wouldn’t play Olympus, Yuki is excited to see how things play out.

“I’m not completely against experimenting with Olympus because somebody’s got to do it [eventually], you know?” he explains. “And if BLAST Titans is the first, then sure, why not? It’ll be good to see if it does work for the future.”

Yuki also believes that the main reason why so many pros were concerned about Olympus’ inclusion was drop spots. The Brit says that as it is an underplayed map, teams have not had the chance to claim spots as their own yet, and hoped this won’t cause too many early deaths. Aside from this big question mark, he says competing on Olympus should be an enlightening experience.

WEEK ONE BATTLE ROYALES WILL HAVE TWO MAPS IN PLAY 🔥

We are putting our pro’s to the test as they will need to show their skills on both maps!#BLASTTitans pic.twitter.com/f6AJBxUeFu

Another of BLAST Titans’ well-known competitors, Shivam ‘ShivFPS’ Patel of soloQgoats, is also intrigued as to how things will play out, and predicts that Olympus will provide some “hectic” action.

“I have played Olympus in some tournaments, but not with this calibre of players,” ShivFPS tells The Loadout. “I think it’s quite a congested map, and I think a lot of third parties happen on Olympus. So it might be quite a warzone, to say the least. Because all the POIs are quite close to each other, I feel that maybe it will be a bit hectic. But we’ll see.”

While it’s safe to say Olympus isn’t necessarily the pros’ map of choice, this offseason extravaganza from BLAST is all about trying something new. While World’s Edge is definitely the preferred home for its 40 Apex Legends teams, seeing them out of their comfort zones will hopefully provide some great entertainment.

BLAST Titans gets underway on Friday, July 23 on the BLAST Twitch channel.