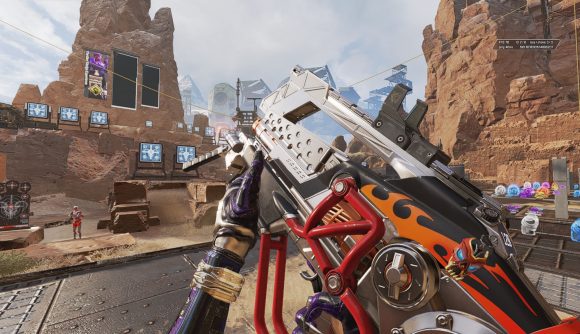 NRG streamer Lindsey ‘LuluLuvely’ hosted the first high-profile Apex Legends Arenas tournament live on Twitch this week, which saw regular ALGS pros team up with some of the biggest streamers for Lulu’s Throwdown 2.

The rules for teams were simple: one pro, one streamer, and one woman, with only one player who could have ever been a finalist in an official EA tournament. Day one of the tournament took place on May 13, and saw teams take to Arenas to vie for supremacy in a win race. The second day will see teams take to battle royale mode in a more traditional tournament style.

Due to the fact that Arenas doesn’t have private match functionality at present, teams raced to register as many wins in the new mode as possible within a four-hour time limit. This led to most teams ending up queueing against each other in exciting 3v3s, but some matches saw the stacked squads roll over unsuspecting opponents who were not competing.

The competition itself highlighted the flaws in Arenas tournament play, namely that the results were based on a “win race,” but many of the participants saw it as a glimpse of what the mode could become.

Once we get ranked, more maps, tournaments… 🚀

The tournament also gave us a glimpse of the emerging Arenas meta, which sees the L-Star emerging as a surprisingly popular economy pick despite its unpredictable recoil. Whether its overheating gets an Arenas-specific nerf or it simply moves up the Apex Legends weapons tier list, the energy LMG looks strong in the 3v3 mode.

Day two of the tournament will be broadcast on Lulu’s LulusThrowdown Twitch channel, with another $25,000 on the line.